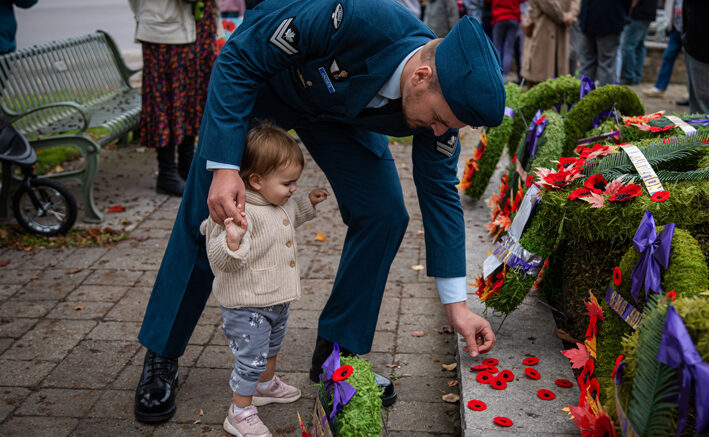 Master Corporal Nick Lacoste from 8 Wing Trenton gets assistance from his daughter, 17 month old Athena, laying a poppy at the base of Picton’s Cenotaph on Friday morning. A good number of community members attended local Remembrance Day ceremonies. (Ophelia Spinosa for the Gazette)

After two years of the COVID-19 Pandemic limiting the size and scope of public gatherings, the residents of Prince Edward County were able to take part in more traditional Remembrance Day ceremonies on Friday. On GUARD (Left) With members of the 851 of the Royal Canadian Air Cadets standing guard, members of the Canadian Forces stationed at 8 Wing Trenton attended Friday’s service. (Jason Parks/Gazette Staff)

At Picton’s Cenotaph, a healthy gathering of observers were witness to the solemn act of remembrance with the traditional laying of wreaths, playing of the Last Post and Reveille as well as oral presentations from County of Prince Edward Mayor Steve Ferguson and Padre Brian Nicholson. In Wellington, as is the custom, local citizenry joined in with current members of the Canadian Forces in a march down Main St. while traditional observances were held in Consecon.

With school children looking on and crowd that eclipsed 200, Picton Legion President Diane Kennedy recalled the origins of Remembrance Day and the end of World War I.

“We take two minutes to remember the soldiers that fought in these wars.”

In the Great War and the War to end all Wars, over 100,000 Canadian soldiers were killed and nearly 305,000 wounded. Canadians would be called into service in Korea, serve as peace keepers in Cyprus and Egypt and played a massive part in liberation of Afghanistan and all those that served in war time and peace time were honoured with those that paid the ultimate sacrifice receiving special recognition on Friday. Local music educator Kevin Gannon played the standard Last Post and Reveille that was followed by prayers of remembrance and thanksgiving by Padre Nicholson.

“Eternal God, we thank you for this land in which we dwell and remember the high price paid to keep her free. We thank for those valiant hearts, who at the call of the sovereign and country, laid down their lives in the cause of freedom.” “We pray the torch of freedom passed to us is held high so that their sacrifice may not be in vane,” Nicholson said.

Mayor Ferguson remarked positively on the tremendous turn out and recalled the sacrifice of those that have served and those that continue to serve Canada at home and abroad. “Remembrance Day is the day Canadians honour those that have served and continue to serve our great country,” Ferguson said. “We thank them, we honour them and we will always remember their sacrifice that helped make Canada the free and prosperous nation it is today,’ the mayor added. “We will wear our poppies with pride and honour.”

Memorial wreaths were laid by the representatives of the Government of Canada, Canada, the Prince of Ontario, the County of Prince Edward and the Hastings & Prince Edward Regiment. Picton’s World War II heroes including the late Special Forces soldier George Wright and Dieppe veteran and POW Russ Burrows were also honoured with memorial wreaths.