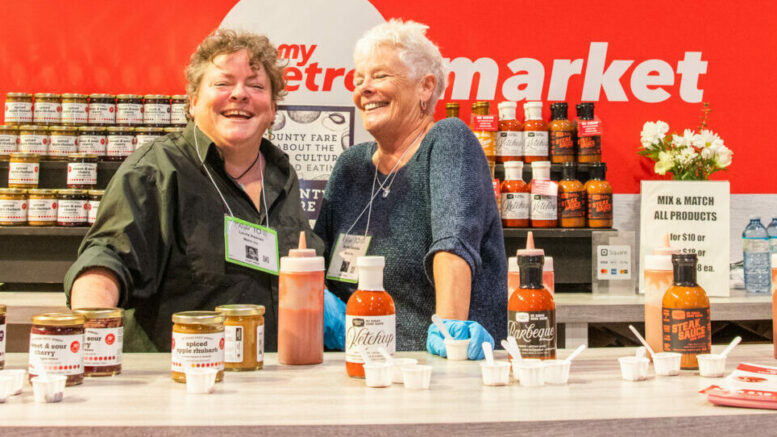 (Right) Naneen Keenan along with her sister Laurie Keenan at the Metro Locally Sourced booth at the Royal Winter Fair earlier this month. (Submitted photo)

As part of The 2022 Royal Agricultural Winter Fair in Toronto and Metro’s locally sourced program ‘Spotlight on Local’ a Prince Edward County business was invited to take part in the 100th running of the late fall Canadian agriculture showcase.

Naneen Keenan and her County Fare are celebrating the 10-year anniversary of the business that started  in 2012 with a small retail shop at the side of Keenan’s house in Picton.

“I had no idea where I was going or what to expect from my business in 2012,” said Keenan. “What started out innocently as a small home canning business has grown beyond my expectations.”

County Fare has since morphed into a family-run business with husband Greg, sister Laurie, being integral to the daily operation. Keenan also sent special shout-out going to her son, Owen, the creative genius behind County Fare’s branding.

“But all members of our family and close friends deserve recognition as all get involved when extra hands are needed and we are truly thankful for this opportunity,” she added.

County Fare handcrafts small batches of specialty food products, such as: fruit-packed no sugar jams, no sugar ketchup, and no sugar barbeque sauce and are all about the art and culture of good eating.

“Our products contain no artificial preservatives, sweeteners or food colouring. The majority of our products are non-GMO, and all are gluten-free,” the County Fare website states.

Being part of Metro’s Locally Sourced program has benefitted County Fare and , by extension, the local community that has enabled them to grow as a business. “Being able to sell our products in their stores, from Cobourg to Brockville, has allowed us to up our production, hire more local employees, and use our local community kitchens more often such as The County Food Hub in Sophiasburgh and the Ontario Agri-Food Venture Centre in Colborne,” Keenan told the Gazette, adding this recent honour is one for the community.

“This is why it’s so important to support local. What benefits our business turns out to benefit our communities. We also recognize that we would not be where we are today if we didn’t get help and support from our neighbours, local businesses and organizations that have helped guide us along the way with their various expertise,” She added.

As the largest indoor agricultural fair in the world, The Royal Agricultural Winter Fair is in their 100th year with its spotlight on supporting local food entrepreneurs.

As said on The Royal Fair website, Since 1922, the country has come to the city as farmers, growers, producers and homesteaders have come from all over Canada to exhibit their very best agricultural products and livestock.

After the First World War, a collective of notable farmers and horsemen got together to plan an exhibition of Canada’s finest agricultural wares. Led by shorthorn cattleman, W.A. Dryden the group believed strongly in Canada’s ability to compete at a world-class level. Lacking no ambition, the group solicited and received full support from all three levels of government and was granted the Royal moniker by King George V of England.

Building of the Royal Coliseum – a landmark structure that still helps to greet people on their way into Toronto to this day – would commence in early 1921 in advance of the first Fair that November. Unfortunately, construction delays would prevent the facilities from being ready in time and the 1921 Fair would be postponed until the following year. Despite the early stumble, that 1922 Fair was a resounding success, beating all projections. It firmly established The Royal Agricultural Winter Fair as one of the world’s best.

The County Fare label can be found in over 180 retail stores throughout Ontario, including Metro, Sobeys and Foodland.