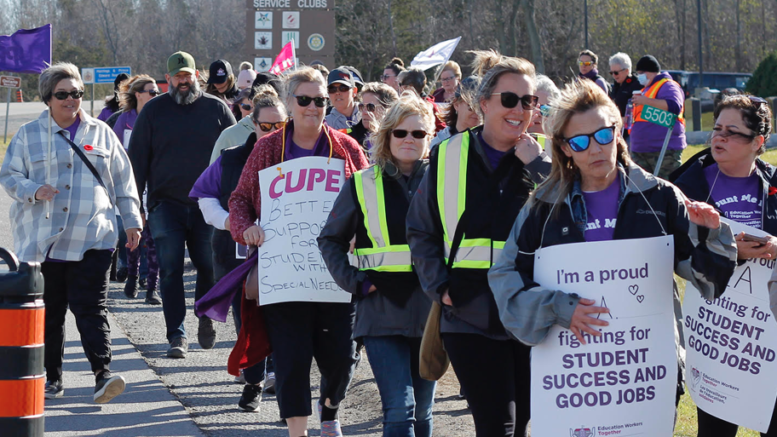 Local CUPE 1022 members avoided the picket lines on Monday but a tentative agreement between their bargaining committee and the province reached Sunday still needs to be ratified. (Desirée Decoste/Gazette Staff)

It was the news most students were dreading and most parents were relieved to hear.

Elementary and secondary schools were open and in person classes were occurring Monday as labour action was averted…at least for the moment.

With education workers gearing up to hit the picket lines Monday, the central bargaining committee for those 55,000 frontline Canadian Union of Public Employees’ (CUPE), members and the Ontario School Boards Council of Unions (OSBCU) announced Sunday they reached a tentative agreement with the provincial government.

“I am pleased to formally announce the Crown, the Canadian Union of Public Employees (CUPE) and the school board trustee associations, have reached a tentative agreement that keeps schools open so that kids can stay in class,” Minister of Education, Stephen Lecce said. “I know this is welcome news to all students, parents, and workers alike, who now have the certainty they’ve been looking for.”

Minister Leece said the agreement was not a win for governments or education unions but a win for Ontario families who “finally have peace of mind knowing their children will remain in the classroom.”

“After two and a half years of unprecedented disruptions, nothing matters more than stability in our schools. We are pleased to have reached a deal today that will make sure kids are in class catching up on their learning,” he added.

This is the first tentative central agreement reached through the 2022 round of central collective bargaining in the education sector and led the way past an interruption of in person learning however the CUPE leadership sounded less than thrilled to be bringing this deal to its members.

The details of the agreement are to remain confidential until ratified by all parties. CUPE has agreed to stop all job action while awaiting ratification of the deal.

“We’re very pleased that students will be in the classroom tomorrow (Nov.21),” said Ontario Public School Boards’ Association (OPSBA) President Cathy Abraham. “This tentative agreement recognizes the important contributions of our vital education workers and the significant roles they play in our schools.”

OPSBA will continue to negotiate a fair and fully funded agreement with the other unions representing teachers and education workers, with the best interests of students in mind.

The ratification vote is expected to be completed by the end of the week, meaning another weekend of school uncertainty should the membership reject the proposal and threaten to strike.