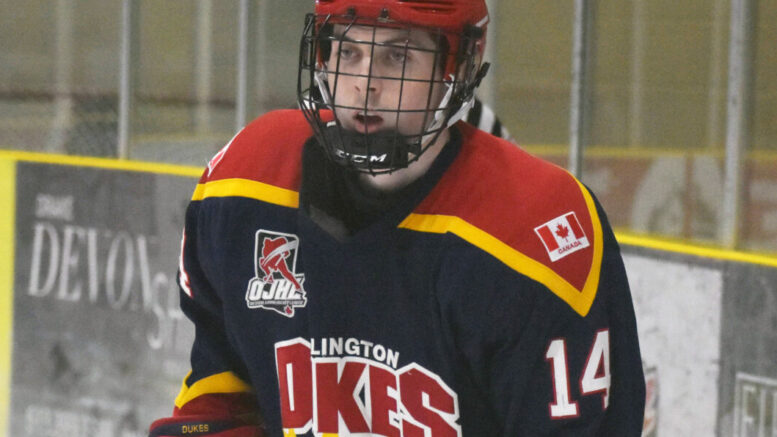 The Wellington Dukes had a light weekend on tap, playing just one contest in their 2022-23 Ontario Junior Hockey League slate…but what a contest it was.

The local Jr. A outfit that’s on a glorious uptick as of late extended their undefeated in regulation play streak on the line on Friday night in front of a jammed Dunc MacDonald Memorial Arena and bested the host Trenton Golden Hawks 5-3.

The win moved the locals to 15-5-3, five points back of their Bay of Quinte arch rival but Wellington has an incredible half dozen games in hand with which to work with.

The victory on the road also evens the Hasty P’s cup to a regulation win a piece.

Wellington got off to a dream start in the contest, leading by two goals after 20 minutes.

Dukes forward Barrett Joynt continued his scorching pace, taking a Edward Moskowitz shot attempt at the side of the net and knifing a puck over Trenton starter Will Dyke at with 3:16 left in the first.

That lead was doubled less than two minutes later while Wellington works on the power play.

Former Golden Hawk defender Julian Jacob made a smart slap pass to the short side where Ryan Smith redirected his seventh goal of campaign at 18:44.

The Bala, ON native’s hot streak mirrors that of his club.With the goal, Smith has 12 points in his last eight games.

While Wellington controlled the scoring in the first, the hosts were able to notch a pair of their own in the second, setting the stage for a thrilling third period.

Just 1:19 into the middle stanza, Lucas Robinson’s long range shot from the blue line made its way through a sea of humanity wearing Dukes uniforms in front of Wellington starter Jacob Osborne to bring the Hawks to within a goal. Later in the period, Jacob Fuller pulled past Jacob off the half wall and put a nice back hand past Osborne at the 10:52 mark.

In the third of what was typical hard hitting and back and forth affair between the forever rivals, Wellington was able to pull away.

Dukes defeceman Jacob Dietz did not receive credit but it was his point shot whilst on a power play at 6:57 that Dyke stopped but couldn’t control  and ended up on the stick of Mason Matheson.

Matheson was able to rip a wrist shot past the Trenton netminder to give the Dukes their first lead since the midway point of the game.

Wellington would not relent and it was Connor Hunt’s snap shot off a 3-on-2 rush that snuck past Dyke at 12:12 that provided the locals a 4-2 lead heading into the game’s final stages.

That insurance on the part of Hunt was huge as David Fournier’s tip of the puck in the eye line of Osborne at just over a minute after Wellington doubled their lead made for a thrilling finale.

In the waning moments, the duo of Joynt and Luke LaPalm  chased the puck towards the vacated Trenton net with LaPalm getting his stick on the puck last for his eighth of the season to make the final 5-3.

The Dukes are on the road Thursday in Caledon and then travel back to Wellington to host the North York Rangers Friday night.

Wellington completes the home and home on Wednesday afternoon at 2 p.m.