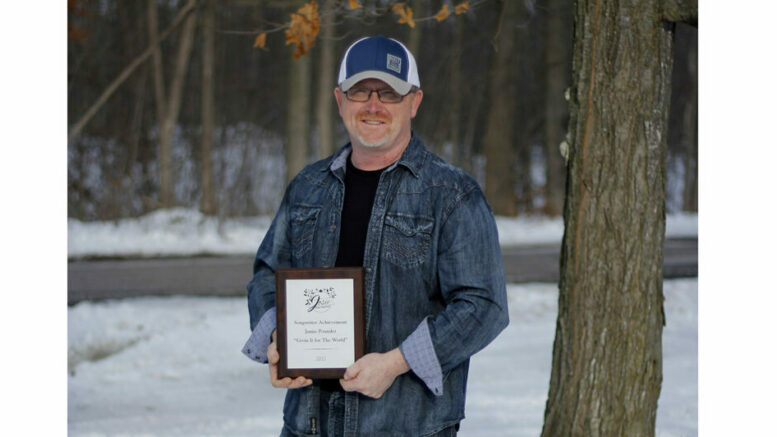 Prince Edward County native and musician Jamie Pounder earned a Songwriters Achievement award for his song ‘Givin’ It for The World’ at the 8th annual Josie Music Awards (JMAs) held at the Grand Ole Opry House in Nashville, Tennessee  in October.

The JMAs is a brand of The Josie Music Association, LLC owned by the highly-respected partnership team of Josie Passantino and Tinamarie Passantino. The JMAs is an all genre music award show ceremony which includes a lavish red carpet and many performances. Since its inaugural celebration in 2015, the JMAs are the globe’s largest independent music award show and the gala and red carpet reception has been hosted at such prominent venues  as The Gaylord Opryland Resort “The Springs” building and the world-renowned Schermerhorn Symphony Center Concert Hall, The Nissan Stadium (all located in Nashville, Tennessee) ,  The Celebrity Theater in Dollywood (Pigeon Forge, Tennessee), the Country Tonite Theatre (Pigeon Forge, Tennessee), and this year at The Grand Ole Opry House (Nashville, Tennessee).

There is nothing else like it in the independent music industry and a Prince Edward County native was honoured in the event’s most recent running.

Pounder explained he created and dedicated his award winning song to frontline workers during the high point of the COVID pandemic.

“People always ask me how long it takes to write a song, this one was 20 minutes. I wrote it, recorded it and it just went viral,” Pounder expressed to The Gazette. “I was in shock when I found out I won the award. I’ve been nominated six times and some of the people that are at these awards are either on the strip in Nashville waiting to be signed and they’re on their way, I’m just happy to be nominated from 54,000 people.”

The JMAs were created solely to celebrate those in the independent music industry that work so hard every day and deserve to have a night of their own and that describes the local singer to a tee. A rise to local prominence as the front man for 62 South, Pounder has been ‘pounding’ local stages and honing his craft for decades and comes by his success honestly, having first gotten behind the mic when he was just four years old.

“My dad was a singer song writer so I wasn’t even five years old when I first walked on the Stirling Jamboree stage in Stirling and that moment stuck with me ever since,” said Pounder. “I’ve always written but I never put it out there until after my dad passed and then I went to Nashville after the first CD I released, I went down there for some song writers circles, and they had some good advice for me and it kinda stuck. When they say don’t ever die with a song in ya, always play and sing it, you never know. It was like this song, this was the last song I would ever think I would get an award for, I’m thinking all my others are my best shot I’m going to get, this one I never even thought of putting on a recording, I just did a Facebook video and played it and it went viral. You never know what can happen.”

Pounder and 62 South will be reuniting on Dec. 2 to play Coach’s Bar and Grill. The show starts at 9 p.m.