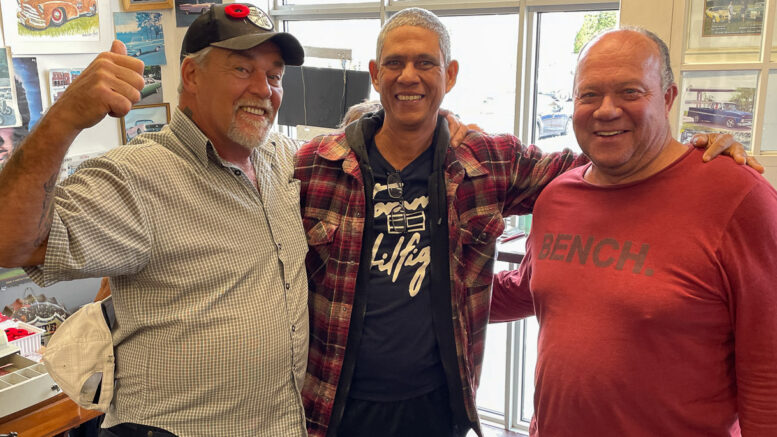 Despite all of the doom and gloom news in the world and the modernization taking place here, it’s good to know Prince Edward County is still a caring community and ready to offer a helping hand to those in need.

Each time I go for a haircut at Mark’s Barber  Shop on Picton’s Main Street, it always leads to making new friends. I’ve met countless musicians who play there on Thursdays, a pilot who fights forest fires out west and a lot of local guys who hang out and tell stories.

Most recently, it was Jorge who just arrived in The County from Cuba. He’s staying with Gordon Amos who first met him as his taxi driver at a Cuban resort. Their story beats all of the others, a remarkable true tale of a perilous walk through Central America to political asylum in Canada.

Jorge Ramirez-Quiala is from Los corales Santiago de Cuba. His language is Spanish and his culture is Hispanic Cuban with a little bit of Chinese from his mother’s father. After 15 years giving tours to Canadians in Cuba, he speaks good English but is quick to check his phone and Google Translate during a conversation. The taxi service and guided tours were his own private business which is frowned upon in a Communist country. He has a 1956 Ford Fairlane and snapshots of the many visitors he drove around.

“Many people see me from Canada, thousands,” he says. “If you put my picture in the newspaper everybody will say ‘that’s Jorge El Chino’,” the nickname he uses. As a taxi driver for tourists he wears a red cowboy hat and shirt.

Gordon Amos was one of those tourists. He says he was bored at the resort and asked Jorge to take him for a ride. That turned into an adventure.

“There was a lot of rum,” recalls Gordon. “It was like a horn trip! Jorge gives rum and cigarettes to police as bribes. He knows everyone.”

Jorge explains, “I’m not communist so making money is illegal. I had four cars; they took three.” Only the Fairlane is left and now that Jorge is gone, his son drives taxi.

It was his son’s poor health that drove Jorge to take the risk of travelling. The Cuban doctors did not have the medication to treat his Crohn’s Disease. Javier Ramirez is 28 years old.

“My son was very sick and maybe die. There was no medicine and two times he was operated. The hardest thing in my life was hear my son screaming. I say to my son, I go to America and I bring medicine to you. I did it. It is completed.”

Keeping that promise is much easier said than done. It took $12,000 which Gordon gave him to pay smugglers and bribes and there were threats on his life as he journeyed through El Salvador and Honduras. He saw others shot and killed. It started with $4,000 US for a half-hour flight from the airport in Holquin to Nicaragua. He had Gord’s credit card. Then weeks of arduous travel by walking, horse and buggy, and boat, over mountains and swimming across the Rio Bravo carrying his backpack. It’s like a modern-day Underground Railroad, except nowadays he could send pictures to Gordon every day.

Jorge says his niece is going to write a book about his trip.

He spent four days in a detention centre at the Mexico-USA border last April and was freed on May 1. Then he paid $1,400 for a flight to Miami where he got the Pfizer COVID vaccine and felt sick with a fever for three days.

“110 degrees in the sun, I work hard.” He sent money to his brother back in Cuba who walked 10 km to feed Javier.

Finally he took a plane from Miami to Philadelphia and then a bus north to Plattsburgh, NY and a taxi to Roxham Road on the Quebec border.

“I was very cold; I had no jacket. I took three steps across the border and the police came. They did a body search and handcuffed me.”

He told the police, “Either let me stay or shoot me”. He has political asylum in Canada.

“The RCMP are very good people,” he says. “They always respect me. They give you all food you want. I’m in jail but it’s like a hotel.”

He also commended Canada Immigration for their help.

When Gordon and Monika arrived in Quebec to pick him up, Jorge said, “I am as free as a bird.”

“Gordon’s family helping me too much. I will stay in Picton forever. Now my country is Canada. I go to my second country.”

Cuba seems to be Gordon Amos’ second country. He has an apartment inside Jorge’s house where he can stay. They have been friends for five years and Gordon has been sending money and items for Jorge’s family and community. “They come in my home for food, money, medicine, bread. I don’t say it was from me. It’s from a Canadian”.

Jorge and Gordon’s friendship has made a difference for many poor people in Cuba.

Gordon says he is going to Cuba this winter with 100 pairs of shoes and 14 baseball gloves. He gets charged $800 for the extra bags.

He welcomes others from the County community to pitch in to his humanitarian efforts.

He has some support from the Ontario Medical Supply in Kingston which provides doctors with sutures, scalpels and medicine.

A Cuban proctologist is waiting for Gordon to deliver such supplies and Gordon is trying to get a prescription drug to take back to Cuba.

Mark Redmond helped out by sending hair clippers to Jorge’s son to make money giving haircuts. Mark says maybe his son can come up here and take over his barber shop.

The good news kept coming in November as Jorge’s wife has arrived in Prince Edward County and they are staying with the Amos family on Ridge Road. Dr. Elizabeth Martinez Noa is a doctor of general medicine and radiology.

“She is the protagonist of my story. Without her my adventure is not possible because every morning she gave me the good morning, the love to carry on. She is very sweet, but very strong.”

Despite the oppression he lived under in Cuba and his treacherous escape, Jorge had us laughing at his stories of mixing up words in English and how he became a licensed excavator operator after playing around with Gordon’s heavy machinery at the Ridge Road quarry.

He holds a joyous outlook on his new life—even as he shivers from trading the Cuban tropics for a Canadian winter.