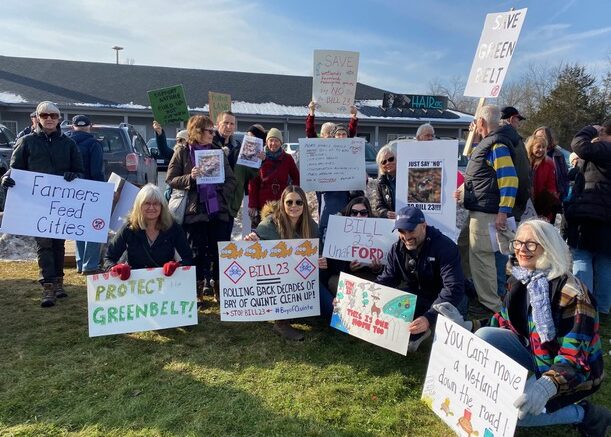 A number of concerned Prince Edward County citizens joined together at Bay of Quinte MPP Todd Smith’s office on Thursday to voice their opposition to Bill 23.

The contentious measure which received its third and final reading in the Ontario Legislature Monday  aims to accelerate housing development to erect 1.5 million homes over the next decade but, at the same time, circumvents any local oversight and control by municipalities and Conservation Authorities by way of this one size fits all provincial planning tool.

The legislation will carve into the fees municipalities can charge developers for the cost of building infrastructure to support new communities while some critics say the act will also have dire environmental impacts.

While much verbiage has been made about the clawback of acreage in the Greenbelt and the loss of farmland and green space surrounding the City of Toronto, detractors have noted a majority of significant wetlands including many in the Quinte Conservation catchment area will be put at risk without local control and oversight.

Member of the Prince Edward County Field Naturalists who organized the protest and President of the Green Party of Ontario’s Bay of Quinte Riding Lori Borthwick said Premier Doug Ford was creating a false narrative in the Bill which claims there’s a choice to be made between  the environment and building housing. “His own Housing Affordability Task Force confirmed that a shortage of land is not the cause of the housing crisis. It said the Greenbelt should be protected,” Borthwick said. “ This law proposes to limit our Conservation Authorities’ ability to comment, appeal and influence development on environmentally sensitive lands.”

According to Borthwick, Under the new Ontario Wetland Evaluation System only 1 of 100 wetlands currently considered as protected would meet the criteria to be protected in the Conservation area.

“That is a loss of 99 per cent of our wetlands to speculation,” Borthwick said. “As climate change continues to cause extreme weather events we need our wetlands to retain rainfall, mitigate flooding and store carbon. The plants and animals that call these incredibly biodiverse areas home have no vote and no voice.”

South Marysburgh Councillor John Hirsch spoke at the protest as president of the South Shore Joint Initiative and mentioned MPP Smith has been considered as a friend of the environment, dating back to his opposition of industrial wind turbines that would have threatened Blanding’s Turtle habitat and decimated the local brown nose bat population.

More recently, Smith has supported SSJI’s proposal to turn a pair of crown land parcels on the south shore into a conservation reserve.

“But now his government has turned 180 degrees and declared war on wetlands, conservation authorities and the GTA Greenbelt,” Hirsch said.

Hirsch noted that proposals to allow building on 15 sections of the greenbelt and in sensitive wetlands would only produce  luxury housing, not affordable housing and that “the wetland offset proposals have no biodiversity value whatsoever.”

He added removing Conservation Authorities from the planning process will only increase municipal costs and that local planning departments will be forced to review items and issues that have not been the typical domain of County staff.

With a majority government in place, Hirsch ventured the Bill itself was a ‘fait accompli’ – but that there was still hope to affect the regulations emanating from the legislation and there is still time for concerned public members to make comments and proposals for amendment by way of logging on to the Environmental Registry of Ontario.

While the local impact on the loss of development charge revenue  is still being determined, Mississauga mayor Bonnie Crombie took to Twitter after the bill’s passage and explained to constituents the legislation will cost her city $885 million over the next ten years and that figure is equal to 20 per cent of the capital budget.

“Development charges are earmarked for capital projects – the infrastructure projects like bridges, transit, fire stations and community centres that make our city great,” Crombie explained. “Bill 23 takes money that has been earmarked to improve your community and gives it directly to developers.”