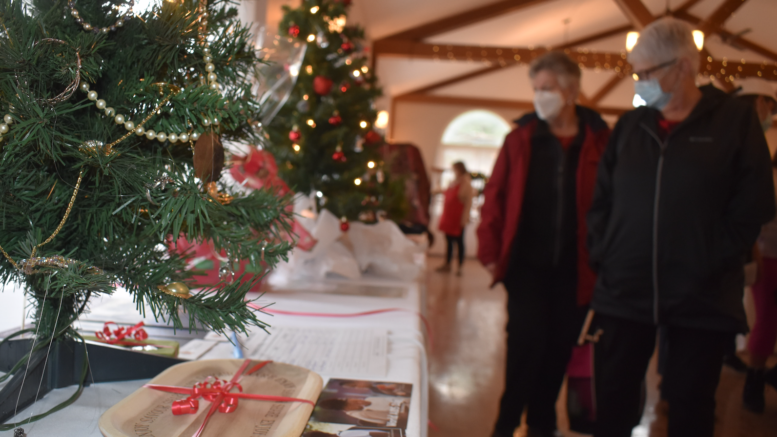 Prince Edward County was once again delighted by the scintillating lights of the Festival of Trees after a two-year, pandemic induced hiatus. The festival, which began 29 years ago, has been under the guidance of the Prince Edward County Memorial Hospital Auxiliary for 15 years.

Liz Jones, Manager of The Festival of Trees, spoke briefly with the Gazette about this local Christmas tradition. Axl Prinzen contimplates his Christmas wish list with an important audience of one. (Jason Parks/Gazette Staff)

“There were hundreds of people in attendance, though I couldn’t tell you exactly how many. I will tell you we had over 100 volunteers that helped us put this on,” said Jones. “It’s not just auxiliary members. We also call upon friends. There are over 100 jobs to be done over the course of the weekend. It’s very much a community event.”

100 per cent of the proceeds go toward medical equipment for the Prince Edward County Memorial Hospital.

When asked how much had been raised, Jones was careful to note that revenue is generated from several sources, for example baked goods, gift certificates and the second-hand store Christmas sale.

“The numbers aren’t all in, but it’s a trifecta. It’s the work of the Perfectly Preserved ladies who did bake sales throughout the year for the festival, the Christmas boutique was held at the second time around shop, and then we have the silent auction of trees at a third location. The combined effort will be more than our $60,000 anticipated goal,” said Jones. Jones described immense gratitude at being able to host the Festival of Trees once more.

“I felt gratitude at the way that our community donors, restaurants, people, stores came out and decorated trees for us to watch and then of course the great number of people that came and bid,” she said. “We also had volunteer entertainment the whole time.”

Jones described a generosity of spirit that infused the 2022 Festival of Trees.

“It’s so great to see people bid more than the value because they know it’s for a good cause. I think that’s very generous,” commented Jones.

All told, over 200 trees were auctioned this year along with a variety of gift certificates.