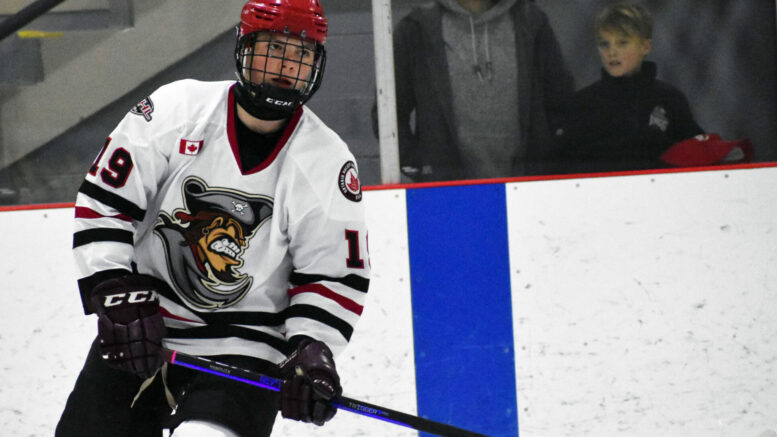 After their winning streak of five games was interrupted at the hands of the Napanee Raiders Thursday night, the Picton Pirates turned in a gritty effort on Saturday in Port Hope and skated away from the Panthers 3-1.

Without captain Landon McLellan who was involved in a fracas near the end of the Thursday’s contest and incurred a one game suspension for fighting in the last ten minutes of a match, the Pirates got a pair of goals off the stick of Nick Kirby to provide the winning margin at the Jack Burger Sports Complex.

Rookie Liam Philip would add an empty netter late while Brady Spry stood tall in the Picton net, making 29 saves in securing his eighth win of the campaign.

For Pirates coach Kyle Hawkin Schulz, the effort in a big bounce back game for the locals was pleasing to see. Picton’s Cole Stevenson skates past Napanee defender Will Potts Thursday night. A pair of powerplay goals were the cause of Picton’s downfall in a 2-1 set back. (Gazette Staff)

“Our effort against Port Hope was consistent to the level we want to play at for three periods of hockey,” the coach said. “Thursday was a tough game so being able to go on the road Saturday and find that level was something we focused on.”

On Saturday, Picton opened the scoring in the first period when Zack Brooks spotted Kirby driving to the net and the Consecon native found mesh behind Port Hope starter Sam Dingle at 13:13.

In the second, Port Hope responded when Carter Clarke’s blast at 11:22 eluded Spry and squared the affair at 1-1.

Early in the third, the Pirates had the ice breaker as Kirby, filling in as pivot for McLellan on Picton’s top unit, converted a Philip pass at 4:16 to push the Pirates ahead for good at 2-1.

Spry came up with 13 stops in the frame and, with Dingle lifted for the extra attacker, Philip was able to intercept a Port Hope pass and sink an empty netter with 19 seconds left to make it a 3-1 final.

On Thursday, there wasn’t much difference between the Pirates and Raiders as the visitors skated into Picton looking to avenge their first loss of the season two weeks prior.

Outshot in the first period, Picton would register the first tally of the game in the second frame as three local skaters combined to break through.

Ameliasburgh’s Garrit Kempers lead pass was moved into the Napanee zone by Picton’s Ross Maycock. Maycock then found call up Brody Partridge in the high slot and the Cherry Valley resident beat Napanee veteran net minder Bailey Maracle high to the glove side at 4:10 for his first junior hockey goal.

Partridge, a Peterborough Petes draft pick last spring, has been living and playing hockey in the Liftlock city this season for the U18 AAA Petes and, with Picton not having the services of Ian Harrison on Thursday due to suspension, the timing was right to add Partridge into the Pirates lineup.

We are an organization that promotes development, whether it’s player growth within the league or players moving to the next level in their career,” Hawkins Schulz said. “We have numerous players on the team working towards that and this week, another County native Brody Partridge joined the group. We were excited for Brody to play and he made an immediate impact in his first game.”

Unfortunately for the locals, a pair of penalties in the frame would give the Raiders man advantages the visitors wouldn’t miss on.

Noah Westwater’s point blast took a happy bounce off the boards behind Spry at 6:07 and allowed Blake Aylesworth to deposit his 10th of the season to make it a 1-1 contest.

Late in the third, it was Westwater skating along the blue line and ripping a puck high to the glove side at 15:26 to push the Raiders ahead for the first time in the game.

In the third, Picton was out shot but Spry was sharp in holding his team in the game. Afforded a power play inside the final two minutes and able to pull Spry for an extra attacker, the Pirates had a couple of good looks to tie the game in the final minute including one with about 20 seconds to go that needed Maracle’s best save of the night to preserve the win for the opposition.

The Pirates will honour Minor Hockey in Prince Edward County on Thursday when they host the Frankford Huskies. Andrew Shaw, who played a season with the PECMHA in his youth and went not to win the Stanley Cup twice with the Chicago Blackhawks, will be in attendance to drop the puck during a ceremonial face off with local minor hockey player Robbie Watson.

Players wearing their County Kings jerseys will be admitted free.

Picton and the Huskies play the back half of their home and home on Saturday evening in Frankford.