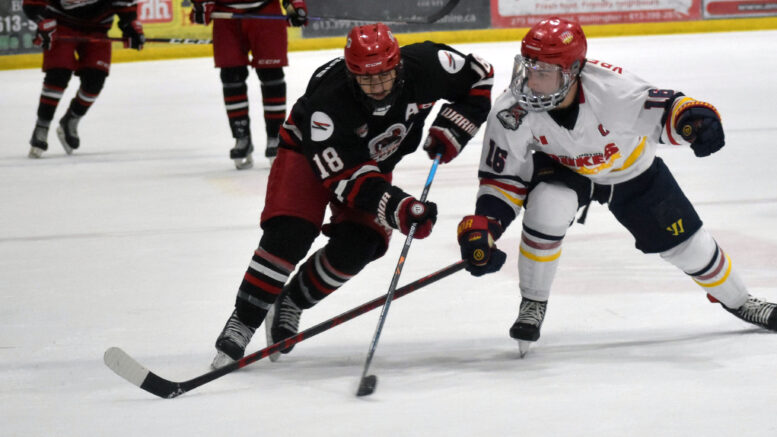 The hot hands of the Wellington Dukes continued to burn the opposition of the Ontario Junior Hockey League this weekend as the club dumped a pair of Northwest Conference clubs.

On Friday, a one goal deficit after the first to Stoufville was no match for the locals as Wellington stormed back with three in the second to stifle the Spirit 4-1.

On Sunday in the land of the Great One, Wellington scored early and often in a 7-2 dumping of the Brantford 99ers. With the pair of wins, Wellington moved to 20-5-3 on the season and their streak of remaining undefeated in regulation ran to 15 games.

On Sunday Wellington blistered Brantford’s defence, sending an incredible 65 shots on the 99ers net and after going up a pair in the first period, a Dukes victory was anything but doubtful.

David Campbell opened the scoring at the 11:37 mark with the Sault Ste. Marie native finding the range twice on the afternoon.

Dietz also had a pair of helpers from Wellington’s back end.

Ethan Morrow made 19 saves in the Wellington net.

On Friday, the Dukes out shot the visiting Stoufville Spirit 20-9 in the opening frame but trailed 1-0 thanks to an Odaro Ewere tally midway through the first.

Undaunted, Wellington kept up the attack and finally broke out midway through the frame.

Jared Langdon hung tough in front of the Spirit net and pushed a puck through a maze and underneath Stoufville starer Nicolas Morvan at 10:34 of the second to get Wellington on the board.

Under a minute later, Moskowitz collected a Dietz feed and swept into the Spirit zone with speed and beat Morvan low at 11:18 to give Wellington their first lead of the game and one they wouldn’t relinquish.

Later in the frame, club captain Jacob Vreugdenhil demonstrated why speed kills. With he and Matheson Mason on the ice to kill a Dukes minor penalty, the former took an outlet pass from the latter and the skater that goes by the nickname “Ruegy” in the Wellington dressing room simply blew the doors off a Spirit defender.

With time and space, Vreugdenhil potted his 16th of the season at the 16:08 mark to make it 3-1 for the host side.

In the third, Moskowitz set up Ryan Smith in the late going to make the final 4-1.

Wellington’s Jacob Osborne made 22 saves for his eighth win of the season.

Wellington is in Cobourg on Monday night and then hosts the Conference leading Toronto Jr. Canadiens on Friday.