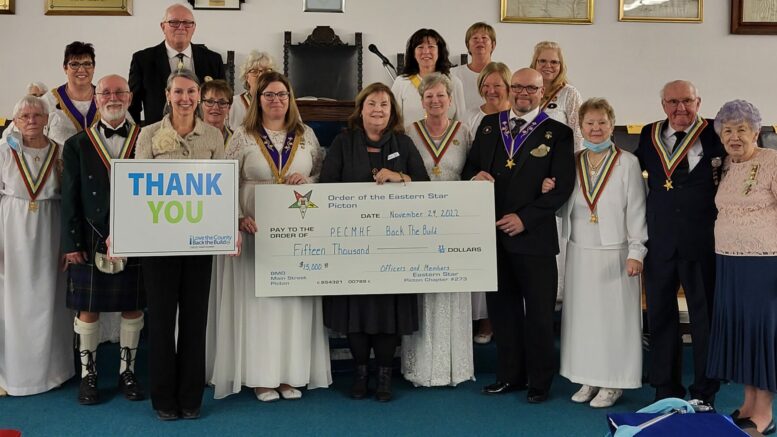 GENEROSITY IN ACTION-Pictured at the Masonic Lodge in Picton are PECMHF’s Executive Director Shannon Coull and Back the Build Campaign Chairperson Nancy Parks with members of the Picton Chapter #273, Order of the Eastern Star. (Submitted Photo)

Order of the Eastern Star (OES), Picton Chapter #273 supports the Prince Edward County Memorial Hospital Foundation’s (PECMHF) x-ray campaign. Recently, they awarded PECMHF with a $15,000 donation to go toward the purchase of a new x-ray machine.

The donation was in recognition of their 70th anniversary.

At their November meeting, chapter members presented Nancy Parks, Back the Build Campaign Chairperson and Shannon Coull, Executive Director of the PECMH Foundation with a cheque for $15,000. The gift will be used to help purchase a new x-ray machine that is needed in the current hospital and will transition to the new hospital in 2027.

At Prince Edward County Memorial Hospital (PECMH), the x-ray machine is used daily. The team of radiologists and Medical Radiation Technologists (MRT) rely on the current x-ray machine to perform over 8,800 exams each year.

“We are incredibly grateful to be the beneficiaries of this wonderful gift from the Eastern Star,” said Coull. “Donor support is key to making the new hospital a reality and that includes arming it with leading edge medical equipment, including the new x-ray machine. We have an extremely rare opportunity to build and equip a modern facility that will improve the quality of care patients receive locally. This is a game changer for Prince Edward County and we are proud to partner with the Picton Chapter #273, OES to invest in the new Prince Edward County Memorial Hospital.”

Thanks to the PECMH Auxiliary, this gift will be matched dollar for dollar.

The Picton Chapter, made up of 45 members, has made consistent donations to local charitable causes over the past 70 years through fundraising efforts including catering, craft shows, silent auctions, monthly smorgasbords, yard sales, and through income earned on their investments.

“Because we are celebrating 70 years as a Chapter this December, our members agreed it was time, once again, to share a larger portion of our investment income to support the purchase of the x-ray machine needed at our local hospital,” said Dawn Pressy, worthy matron of the Picton Chapter #273, OES. “We make these donations in honour of all members, past and present, who have been so diligent in our purposes and who work together with love and harmony. As proud members of Picton Chapter #273, Order of the Eastern Star, we are happy to share this labour of love with members of our community through this donation to the PECMHF Back the Build campaign.”

“Members of the Order of the Eastern Star, Grand Chapter of Ontario have been doing charitable work in the province for over 100 years, and members of the Picton Chapter have worked for the betterment of our community for 70 years. The hospital’s patients are very fortunate to have donors like them supporting diagnostic imaging services at PECMH. On behalf of the Campaign Cabinet, I extend thanks to the entire membership, who include our family, friends, and neighbours, for choosing to Back the Build,” said Parks.

With more than 4,500 members spread across dozens of chapters in Ontario, the Order of the Eastern Star is a fraternal order that includes Master Masons and their female relatives among its membership.

The Order champions a philosophy based on fidelity, constancy, loyalty, faith, love and charity.

“We have always worked in the background to make our contributions to the community and are not about the recognition more so than about giving where needed,” said Pressy.