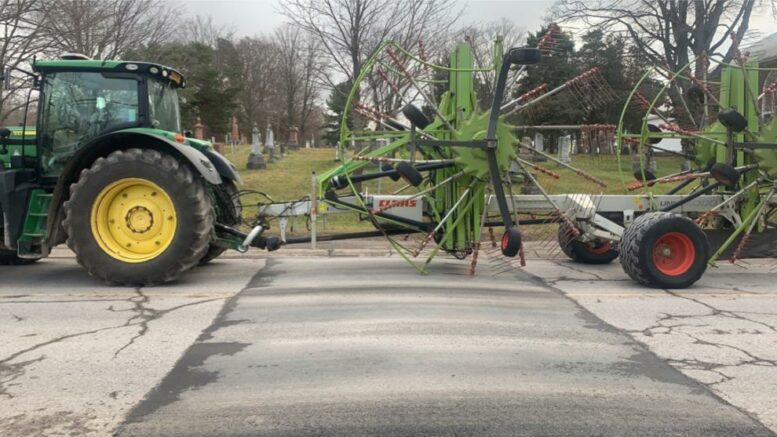 IN THE SLOW LANE-Local farmer, Cailan Raistrick, quickly discovered some of his farm machinery could not handle the new speed bumps in Cherry Valley. (Submitted photo)

The recent installation of several speed humps in Cherry Valley has sparked outrage among many residents. Altogether, six speed bumps were installed along the main road that connects County Road 10 with County Road 18. In summer, the road is a well-travelled route for those wanting to access Sandbanks Provincial Park and, year-round, it is the main artery of this small, agricultural hamlet.

The genesis of the Cherry Valley speed humps as part of a pilot project were discussed during the November 25, 2020 Traffic Advisory Committee meeting. Councillor Brad Nieman mentioned requests for traffic calming measures in the hamlet had been brought by member(s) of the public to the municipality prior although no one on the TAC could recall any staff reports or further advancement of the request. The matter was referred by Nieman back to staff and it re-emerged with a reccomendation the following spring.

In June 2021, municipal staff provided the TAC with a report detailing the benefits and possible risks of implementing speed humps.

The municipal staff report from the June 2021 TAC states a site visit was conducted in March of 2021 to further discuss possible speed hump locations in Cherry Valley.

The staff report also indicated that, as a Pilot Project and  the first installation of Speed Humps in the County of Prince Edward, it will be important to evaluate and determine effectiveness as a Traffic Calming measure for future consideration in other locations throughout the municipality.

As such, staff recommended that two Black Cat Radar Recorder kits be purchased to capture the data needed to conduct the effectiveness evaluation.

Once the Pilot Project is complete, the Black Cat units will be used by Engineering for a myriad of applications ranging from basic traffic counts, speed analysis for areas subject to resident complaint and acquisition of traffic study data.

In terms of financial considerations, The Cherry Valley speed humps were included in the Speed Hump Pilot project and Speed humps have an expected installation fee of $3000-4000 per hump. The installation of fee includes the asphalt hump, required signage and posts/bollards. Additionally, the recommended Black Cat Radar Recorder kits had an anticipated cost $4,000 per unit, making the total anticipated cost between  $26-32,000.

Public outcry against this pilot project has been apparent for the last couple of weeks, with many residents shocked at the installation. A petition protesting the speed humps has already garnered several hundred signatures.

Though the speed humps in question may deter drivers from going above the speed limit, it also presents a challenge for local farmers, who rely on the road for safe passage of their machinery.

One such farmer is Cailan Raistrick who took some time to speak with the Gazette.

Raistrick was careful to note that, if there was public consultation regarding the installation of speed bumps in Cherry Valley, they were not notified. Raistrick learned of the speed bumps when signage was erected indicating their imminent installation.

Cutting straight to the heart of the problem, Raistrick detailed multiple issues they encountered in the first few hours of the bumps being installed.

“The day the bumps were installed we were asked by some other local residents to see what the bumps were like at 40kmh in a tractor, as the County assured us that this would not be a problem and would not cause any damage to farm equipment. I was barely able to exceed 35kmh before being all but thrown from my seat,” Raistrick explained. “Effectively, if you are driving a tractor the valley now has a maximum speed of virtually 25kmh if you want to remain comfortably seated in your machines. This is not ideal when trying to pull more than 55 tonnes up the hill and having to constantly brake for bumps.”

Raistrick also noted the speed humps will likely precipitate premature wear for many of their vehicles.

“There is also an issue of unnecessary wear on the machines. While the machines are capable of crossing far worse in a field, we also do not drive across a field at 25kmh, let alone the supposed 40kmh of the road,” he said. “While going over the bumps a few times probably isn’t going to immediately break anything, it is always a nervous thought…what a few years of doing that consistently could do.”

With the price tag of a single tractor and trailer being as high as $700,000, Raistrick noted he is not the only farmer in Cherry Valley who gets nervous when assessing the cost of constant wear on these behemoth vehicles.

“I know I am far from the only farm with this concern. This is a fear I have had a lot of conversations with neighbouring farms about. Also, there are people running trucks who all feel similarly or believe the County should be made liable for any damage caused,” said Raistrick. “I am more than happy to invite the mayor or any councillor or member of planning committee to ride with me at 40kmh in a tractor through the valley for the day to see for themselves just how bad it really is.”

After testing out the speed humps with their rake, and subsequently becoming stuck on a speed hump, Raistrick notified the County, with the OPP eventually being called in to close the road and allow rake to dislodge from the bump as needed.

“Obviously, this is a major issue that must be addressed and is not just an inconvenience. As a farm located in and with land through Cherry Valley, we are now unable to drive some farm vehicles through at all, at any speed,” stated Raistrick. “Once again, the sheer size of some of our equipment means that they sit very close to the road and there are very specific ways in which it must fold and sit on the road to be within legal height restrictions and avoid catching hydro lines.”

While Raistrick can see the value in helping to reduce speeds and ensuring the safety of pedestrians in the valley, he argues the current solution is not sustainable.

“I can personally understand why they were installed, but I do not think the speeding problem is extremely severe, though I agree that a lot of cars are doing above the 40kmh speed limit,” said Raistrick. “Cherry Valley does not have many pedestrians out most of the time, however, I am in full agreement that if they feel unsafe then something needs to be done to fix this. I do also know there are sometimes school children who wait for the school bus in the morning there. I can understand why something has been done to improve safety in Cherry Valley, I just think these were the wrong solution and I would happily welcome something else.”