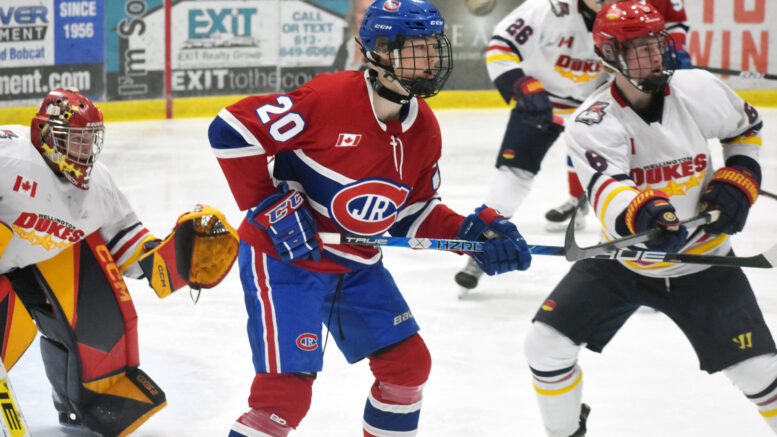 After rolling through the competition of the Ontario Junior Hockey League for the better part of six weeks, the Wellington Dukes hit a bit of a speed bump this week.

Or a speed hump if you are native to Cherry Valley.

With Wellington Dukes bench boss Derek Smith, net minder Ethan Morrow and starry scorer Matheson Mason away in Cornwall at the World Junior A Challenge, the Dukes did everything but score on Monday night in a 5-2 setback to the host Cobourg Cougars.

On Friday, Wellington didn’t draw easy as they took on the Conference leading Toronto Junior Canadiens and chased the and chased the Baby Habs for most of the contest after falling behind 2-0 in the opening five minutes. Finally, on Saturday, the Dukes managed to right the ship and with Picton Pirates callup Brady Spry tending the Wellington goal, the locals busted their two game mini slump with a 6-2 victory. Wellington is in Pickering on Tuesday afternoon to play the Panthers in your OJHL middle of the work day game of the week.

At 21-7-3, the Dukes still have the third highest winning percentage in the Conference at .726, tailing the second place Haliburton County Huskies by a single winning outcome.

On Monday Cobourg was very opportunistic, potting four goals on 18 shots while adding an empty netter in the late going whilst Jacob Osborne was lifted for an extra attacker.

The clubs traded power play goals in the first with David Campbell beating the buzzer for Wellington with seven seconds left in the frame. But despite out shooting the the Cougars heavily through the opening frame, it was Cobourg adding their lead in the second act as Tyler Hunt and Kallaway Mercer lit the lamp behind Osborne.

Wellington got closer in the opening minutes of the third as Jacob Dietz found twine behind Cobourg starter Ryan Piros at 1:48 of the final stanza but the Cougar goalie came up big in the third, saving some of his 40 saves for crunch time.

Perhaps spent from trying to even the score all frame, Wellington was finally on their heels in the late going and would surrender a back breaker on a Cobourg power play with less than two minutes left in the contest.

On Friday, Wellington would give up a pair of goals to Tyler Fukakusa and Matthew Wilde in the first 5:08 that left the Dukes scrambling for the rest of the contest to get the game back to even.

Connor Hunt would check in with a power play goal at 16:01, taking a feed from Edward Moskowitz and zipping home a volley to cut the Toronto lead in half at 16:01.

But the Baby Habs responded less than 90 seconds later as Owen Saye picked up his second point of the period on a goal at 18:29.

The Dukes would once again carve into the Toronto before the close of the frame with Moskowitz once again playing set up man, this time to Jacob Vreugdenhil with ten seconds left on the clock. Neither team would second in the second although Wellington shooters grazed the posts behind Junior Canadiens starter James Norton.

While Wellington was without their starter, it should be noted Toronto was without their primo net minder Chazz Nixon who is part of the tandem with Morrow backstopping Team Canada East at the World Jr. A Challenge this week.

Wellington couldn’t muster the equalizer through the third thanks to the thick-as-taffy Toronto defence and Norton.

Finally, in the late going and Wellington on a 6-on-4 advantage, the JC’s would bag a short handed empty netter with 63 seconds left to decide the contest. The Dukes would try their luck again and Jordan Karafile replicated Cooper Bertrand’s feat of shooting the puck into the vacated Wellington cage with two seconds left to make it a 5-2 final.

On Saturday, Osborne gave way to Spry who nearly made the club in the fall and the call up was solid in his first OJHL action of the season, making 33 saves for his first Jr. A win and earning first star honours for his troubles.

Wellington took a 3-2 lead to the dressing room thanks to goals by Jaxen Boyer, Mosokowitz and Corbin Roach and it was all Dukes in the third.

Campbell gave the club some insurance early in the third and then Barrett Joint and Ryan Smith tallied power play goals late in the frame to make it a 6-2 final.

Team captain Vreugdenhil would register his 150th point in the game.

Wellington hosts Lindsay on Saturday afternoon for the CHCH Game of the Week and then travels to Trenton for another instalment in the Hasty P’s Cup Sunday night.