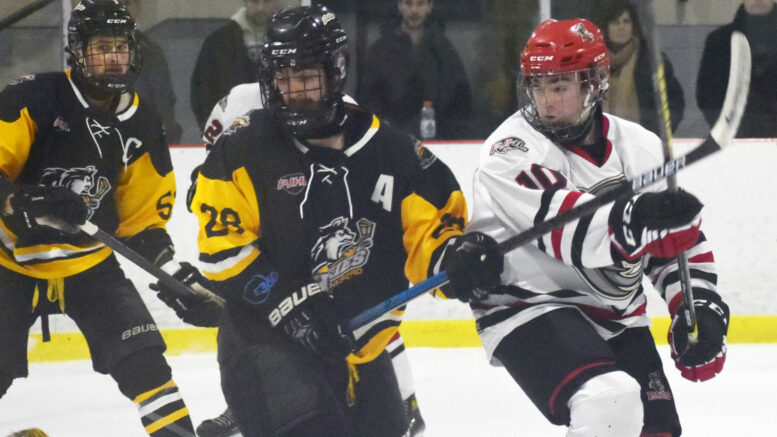 The Picton Pirates let a point slip through their fingers on Thursday night and then paid a premium for their mantra of development first on Saturday as the locals managed a solitary point in a home-and-home set against the Frankford Huskies.

Picton’s Landon McLellan and Rheydan McCoy had open looks in the slot area in overtime on Thursday night only to be foiled with a pair of desperation saves by Huskies net minder Hayden Candler. Eventually, the play worked back towards the Picton end of the ice Jacob TInney was able to skate to the front of the Picton net and beat Brady Spry with the game winning tally at 3:14 of overtime.

On Saturday in Frankford, Spry was unavailable as he was loaned to the Wellington Dukes for their game in Mississauga against the host Chargers.

While Spry’s first win in the OJHL was a silver lining, Picton was forced to dress a pair of affiliate goaltenders as Spry’s goaltending partner Ethan Beattie remains sidelined with what is assumed as mononucleosis. In his first junior action, goaltender Jaysen Bou-Zeid of the AAA Credit River Capitals came under fire early and often as the Huskies managed a five spot in the opening period thanks in part to a Karsten Leonard hat trick.

With less than 30 seconds left in the first, the Pirates finally stopped the bleeding when Cole Stevenson set up Jack Dow for the overager’s 15th of the season.

In the second, The Bucas came roaring back with four unanswered goals. Dow potted his second of the game while Stevenson scored on a penalty shot and Landon McLellan and Gerrit Kempers chipped in with singles to make it a 5-5 game after 40 minutes. But Tinney would capitalize early in the third to turn momentum back to the hosts and a Blake Ellis goal just 1:23 later put the Huskies ahead for good.

A Curtis Dicks goal later in frame made it an 8-5 final.

On Thursday at Prince Edward County Minor Hockey Appreciation night, 300 fans were entertained with a late come back by Picton and a wild if not short overtime period of 3-on-3 hockey.

After a scoreless first, Picton would break the ice early in the second as Cole Lavender sprang McLellan on a rush at 48 seconds that the Capitan snapped past Candler.

But later in the period, Maguire Slone was allowed to skate in form the blue line and Picton the corner on Spry at 6:24.

Later in the period, a bad decision at the Pirates blue line paved the way for a Blake Ellis wrap around effort at 13:46.

Early in the third, the Huskies tacked on to their lead as Tinney was able to jam home his 21st of the year just 1:13 into the frame to  make it 3-1.

Picton was able to get that goal back as Stevenson grabbed a loose puck at the Picton blue line and walked in alone on Candler, depositing a back hand effort at 3:32.

With the score 3-2 and Picton pressing, the Huskies were unable to clear their zone and an extended stay in their end led to Nick Kirby feeding Zack Brooks for the latter’s fourth of the year with 1:57 left in the game.

The Pirates will be idle on Thursday and then head to Napanee for a road game against the Raiders. Picton finishes off the 2022 portion of its schedule with a home game against Amherstview on Thurs. Dec. 22.

On Board with the Pirates: The PJHL prospects event originally scheduled for last month in Grimsby has been rescheduled for Jan. 14 in Georgina. Liam Philip, Beattie and Kempers are expected to suit up to represent the league’s Eastern Confrence while bench staff Kyle Hawkins Schulz, Rick Van Vlack and Lindsay Stakes will also attend…In addition to Spry’s first OJHL win with Wellington, the club was thrilled to learn this weekend 2021-22 graduate Nolan Lane will play in the Greater Ontario Junior Hockey League’s Prospect Game Dec. 27 in Ayr, ON. Lane has posted an 8-2-1 record with a 2.65 GAA and .909 save percentage with the Fort Erie Meteors this season.