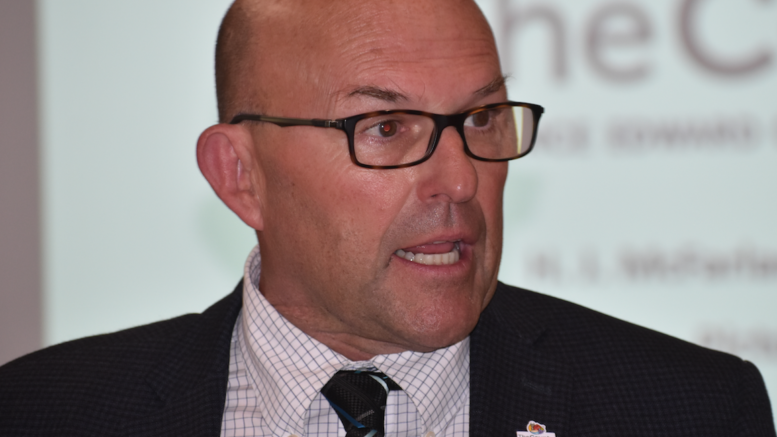 “We are extremely honoured to welcome the Lieutenant Governor for this special occasion,” Mayor Steve Ferguson said. “Her Honour has been a strong supporter of Prince Edward County over the years. She has visited our community on several occasions, taking a keen interest in local environmental issues as well as our thriving arts scene.”

As the representative of King Charles III, Dowdeswell carries out constitutional and ceremonial duties With and engages with communities around Ontario. CAPTIVE AUDIENCE With members of Council looking on, Ontario Lieutenant Governor Elizabeth Dowdswell offers remarks to successful candidates and the electors in the audience at the Regent Theatre Monday, Dec. 5. (Todd Smith Facebook)

Addressing the audience in anticipation of the forthcoming four-year term, Ferguson assured them that he, along with the elected councillors, take their positions seriously.

“By participating in the election – by taking the time to cast your vote – you did your civic duty and elected your municipal representatives for the next term. Within the Canadian democratic system, federal, provincial and municipal governments each have distinct critical responsibilities, and I can assure you that as your Mayor, speaking on behalf of this council, we take these responsibilities very seriously indeed,” said Ferguson.

In his speech, Ferguson applauded the number of younger people becoming interested in municipal politics, such as the newly elected Athol Councillor Sam Branderhorst-the youngest member of any council in Prince Edward County. He also paid thanks to Dakota Hill, a young volunteer during this election, who as also indicated they will be running in Hillier for the 2026 term of council.

“We need and welcome the engagement of our young people,” Ferguson enthused.

Speaking to those who ran for council but lost, Ferguson paid his respects. He also paid homage to councillors now retiring, such as past Athol Ward Councillor, Jamie Forrester.

“To all those individuals who ran but were not elected, I want to thank you for your dedication to our community and look forward to your continued participation, be it on a committee or with a volunteer organization,” Ferguson stated. “And to those who have retired after years of service – particularly former Councillor Jamie Forrester who has served Athol ward and Prince Edward County for 12 years – you have my sincere thanks.”

Regarding the challenges ahead, Ferguson pledged that the newest term of council would communicate more clearly than perhaps had been the case in the past.

“We pledge here today to do a better job of clearly communicating the issues and the facts, so that our debates are better informed, honest, and focused on the issues that matter the most. And we pledge to make decisions in a timely fashion,” he said.

Ferguson further noted that deliberations would be, in part, based on what he and councillors heard on the “debate trail”.

“Deliberations will also be informed by what we heard on the campaign trail. Tourism management, childcare, aging infrastructure, water management and environmental stewardship of our community were top of mind,” said Ferguson. “We will pay heed to sources like the Vital Signs report from The County Foundation and the community discussion that Thrive Prince Edward County is facilitating.”