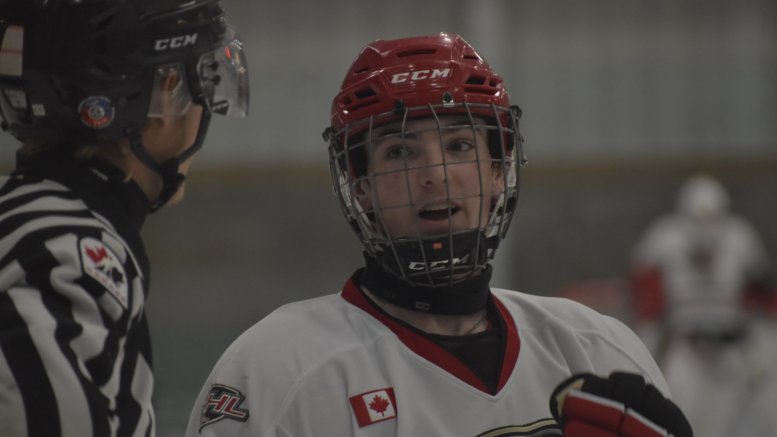 Cole Stevenson and the Picton Pirates came within the width of a goal post from tying up the game Friday night in Napanee against the host Raiders. (Jason Parks/Gazette Staff)

The width of a goal post kept the Picton Pirates from securing one point and possibly two in a wild game in Napanee Friday night against the host Raiders.

For the second straight PJHL contest, Picton saw themselves fall behind by a five spot only to come roaring back and make a game of it.

In their only action of the weekend, Picton drew the Tod Division’s first place club and came into the event with the knowledge they are the only road team thus far into the 2022-23 campaign to earn a win at the Strathcona Paper Centre.

After a scoreless first period, Picton would fall behind by a field goal in the second.

Napanee’s Ben Carter opened the scoring 1:47 into the second and then power play goals off the stick of Soren Zamuner and Connor Brooks later in the middle frame put the Raiders up 3-0.

Early in the third, the Raiders look to be cruising as Adam Nuttall and Ryan Kidd both scored inside the opening three minutes to make it a 5-0 spread in the host’s favour.

But Picton would mount a comeback at the 4:42 mark of the third with call up Brody Partridge setting up Landon McLellan on a power play effort that finally solved Raiders starter Bailey Maracle.

At 9:28, Partridge would pot his second goal in as many games against Napanee with McLellan and Zack Brooks picking up helpers on the scoring play.

Off the ensuing draw after the Partridge goal, Jack Dow fired home his 17th of the season just 17 seconds later to make it 5-3.

The Pirates pressed further and Ian Harrison would feed Cole Stevenson on the power play for the sophomore’s seventh of the season at 11:40 to pull the Pirates to within one.

With Pirates starter Brady Spry off for the extra attacker, Picton’s Brooks would come to within an eyelash of tying the game late inside the final two minutes of the contest off a nice passing play and found iron behind Maracle but the puck skipped away harmlessly.

Napanee’s Cameron Krupa would score an empt netter late in the game to make it a 6-4 Napanee final.

Picton was scheduled to host Amherstview on Thursday however the visiting club couldn’t ice a roster of players due to the Christmas break. The game will be rescheduled in the new year.

In lieu of the game, the club will host a Skate with the Pirates night starting at 7 pm. Fans are invited to bring along their skates and meet the players and take a spin around Huff Estates arena.

Picton’s next action will come Thursday Jan. 5 2023 when they host Napanee.