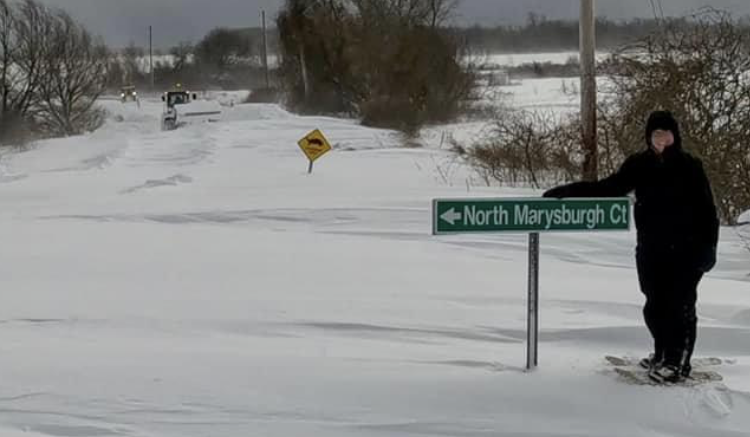 Snow shoe was about the only way of getting around during the Blizzard of 2022 that gripped Prince Edward County this holiday weekend. (Facebook photo)

Pockets of Prince Edward County remain inaccessible and some Hydro One Customers have been without power since Christmas Eve morning as the community digs out from the worst snow storm in recent memory.

Christmas 2022 was very much a varied and communal event in Prince Edward County if you did or did not celebrate the Christian holiday. A “cyclone bomb” weather event that pounded the province of Ontario starting Dec. 23 didn’t spare the whip when it came to the county as heavy snow accumulations that were Lake Ontario enhanced left the many without power and safe passage on local roadways for much of Christmas Eve, Christmas day and Boxing Day.

“We’re getting back to some semblance of normal operations in the County so the State of Emergency has been terminated but the road emergency has not,” County of Prince Edward Mayor Steve Ferguson said via social media on Monday evening as the weather had subsided and municipal work crews had toiled to make most of the County passable. The County of Prince Edward’s Emergency Control Group met at 10 p.m. Friday night to review conditions as snow started falling mid day and had not relented as heavy gusts of wind caused havoc with local road clearing efforts. At that point, Mayor Ferguson declared an emergency due to the impending blizzard.

At that point, The Prince Edward OPP closed all roads in Prince Edward County and general snowplowing efforts were temporarily halted due to low visibility. Municipal staff remained on call to plow for emergency vehicles answering to police and fire calls.

Winds blew in from the south at 70 km/h and were gusting to as high as 120 km/h in areas such as Point Petre.

Vehicles that happened to be on roadways were suddenly snowbound as the municipality and and the OPP conducted rescue missions.

Stranded motorists in more isolated places were soon relying on the spirit of generosity and kindness of nearby home owners as it became clear getting home for Christmas took on a entirely different meaning.

Last minute Christmas Eve shoppers were very much out of luck as the winds and snow continued to dump on the municipality and daybreak on Saturday gave a clear indication how much snow had already accumulated over night-that’s if you could see more than a dozen feet outside your nearest window.

The Norris Whitney Bridge was closed to motorists coming from or heading to the Friendly City.

With widespread power outages and wind chill values dipping below double digits, the heroes of the this suddenly perilous situation started to emerge.

Municipal plow truck drivers worked through the weekend to clear main arteries and County Roads to let Hydro One crews to access remote points of issue and allow service restoration.

Both family and communal Christmas Eve celebrations were scrapped as a shelter-in-place request was made by the Mayor.

“Do not go out tonight! If you do, there is a strong possibility you will get stranded and have to wait many hours for a rescue,” said Mayor Ferguson.

In a weather update, it was stated the municipality’s priority is assisting the Ontario Provincial Police in rescuing the handful of stranded motorists on County roads.

“Please do not add to the number of stranded motorists. Stay home and stay safe,” Mayor Ferguson added. Christmas morning brought a reprieve from the storm and even a few gleams of sunshine through broken clouds but the day illuminated the direness of the situation.

While virtually all stranded motorists had successfully found safety, snow bound vehicles littered the roadways and all roads remain closed on Sunday, December 25 under order of the Ontario Provincial Police. The OPP Driving on County roads is an offence under the Highway Traffic Act.

“I know this is difficult to hear on Christmas Day, but it is not to safe to travel even though the weather warnings have ended,” said the Mayor. “More than 100 cars have been abandoned, which is hampering road clearing. Do not add to this total by venturing out today.”

Plow truck drivers continued to bust through drifts and those that would snarl the trucks were tackled by snow blowing machines on loan from Mayor Neil Ellis and a very gracious City of Belleville Public Works department.

Social media posts that would normally offer a look around the family Christmas tree were eschewed for a look outside local homesteads and the images indicated Prince Edward County had been tasked with a snow storm reminiscent of the famed blizzard of 1977. Snow drifts that approached the tops of telephone polls were evident in some wild and windswept places.

After more work through the night, the OPP lifted road closures on Boxing Day.

“While we have seen improvement, the condition of more than 1,000 km of roads across the County varies and not all roads are passable. As well, visibility could be impacted by snow squalls,” said Ferguson. “I urge everyone to limit travel to essential trips, go slow, take extra time to get where you are going, and give snow-clearing operations extra space.

“I want to express my deepest gratitude to the staff who sacrificed Christmas with their families and loved ones,” Mayor Ferguson added. “Also, thank you to all of the essential workers for their heroic efforts to keep us safe and deliver vital services over this extremely challenging period.”