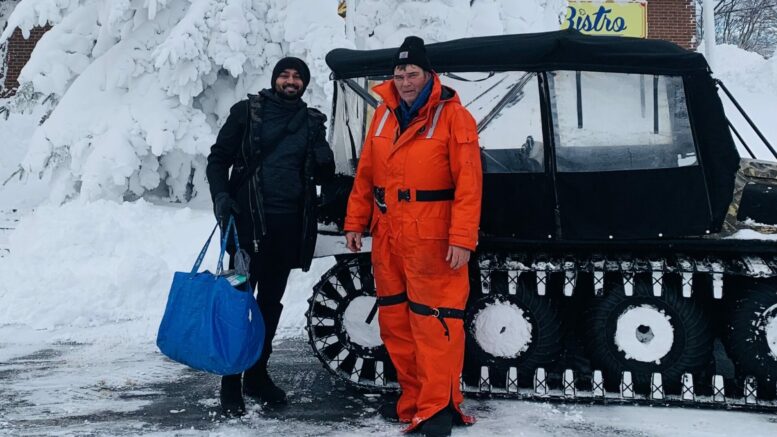 Aravind Remesan and Dan Cole on Christmas morning prior to delivering medication to Hallowell House. Remesan became stranded in Bloomfield and relied on the kindness of the community to complete his delivery. (Submitted photo)

Editor’s Note: The following is a submission sent the Gazette’s way by Jade Leadbetter of Bloomfield and it describes the unique situation of an unexpected Christmas Eve house guest.

Hello all, Jannet and I wanted to share our experience during the PEC storm of 2022! We have been proud residents of the County since December 2020 and are the owners of The Love Loft in Bloomfield.

On December 24th, at the height of the storm, when the winds were raging and you could not see a foot in front of you, we found ourselves out on the driveway, trying to get our two pups to go the bathroom. Both were so scared as the winds whipped up the snow and covered us all. Then all of a sudden, a man appeared at the bottom of our driveway. It was such a shock to see as we had not seen a single soul outside in over 24 hours.

The County was in a State of Emergency, the roads had been closed by order of the OPP, yet here was this man, covered in snow, looking for directions. His car had gotten stuck, like so many others, and he was looking for the Empire Inn on Stanley Street, as the owners, Sabrina and Norm, were offering free food and accommodation to anyone who was in need.

This man was carrying two gigantic bags, and he was covered in snow and ice. In a state of confusion, we pointed him in the direction of Stanley Street and off he went, in snow up to his hips. We offered to keep his bags with us to lighten his load, but he shouted over the wind that he “needed them”. We then snapped into reality and realized he could not make it, the snow was too deep and he looked frozen and exhausted. He had only gotten to the house beside us, but it felt miles away. We ran to him, grabbed his bags and ushered him into the Love Loft.

He was frozen, wet and exhausted. Thankfully we have a fireplace in there that warmed him up, we gave him dry clothes, a bite to eat and some bedding so he could sleep on the couch in the shop. We then learned his amazing story.

His name is Aravind Remesan and he works for a company called Medisystem Pharmacy- Starship Logistics.

He is a Supervisor and one of his colleagues got stuck in Cobourg when the storm first hit. Aravind made the call to take over his deliveries and started his journey to the County. His company told him to turn around if the weather got bad, but Aravind had a special delivery, the bags that he was holding on so tightly to, the bags that he said he “needed” to keep? Well they were full of medication for Hallowell House, a Long Term Care Home in Picton.

Aravind knew people needed their medication so he tried his best to get there.

Unfortunately, about four kms from his destination, his vehicle couldn’t take it any longer and gave out on him. Aravind was stuck, but he knew he couldn’t stay in his vehicle because he was a sitting duck on the side of a road that was completely covered in snow drifts. So he walked, and he walked, bags in hand, determined to make it to his safe haven. We were so thankful we were out with the pups at the exact time Aravind was passing by and we could intercept him as the storm was raging.

The next morning, the wind had settled but the snow left behind was just massive in size. Aravind, being ever resourceful and determined, put out a call for help on the local PEC Facebook page. His call was answered by local PEC resident Dan Cole (Cole Contracting) who came in this incredible vehicle called an “Argo”. This Argo could float in water and fly across the snow! Dan fit all of the medication in the back, brought Aravind a coffee and an extra pair of gloves and off they went, it was an amazing sight to see.

Aravind made a successful delivery to Hallowell House at 10:30 a.m. on Christmas morning to the relief of the residents who were depending on their medication.

Aravind has been in the County since, as his car needed to be towed out of the ditch and brought to Prinzen Ford. Thankfully Prinzen Ford jumped into action and Aravind traveled back home December 30th.

Jannet and I wanted to tell this incredible story because we have never personally experienced people pull together like this in a time of need. We are proud to call Bloomfield our home and are even prouder of this community of beautiful humans .

Thanks to all who made this journey a safe and successful one, and a Happy New Year to all! Best of luck Aravind, the County will miss you and you will always be welcome in our home!