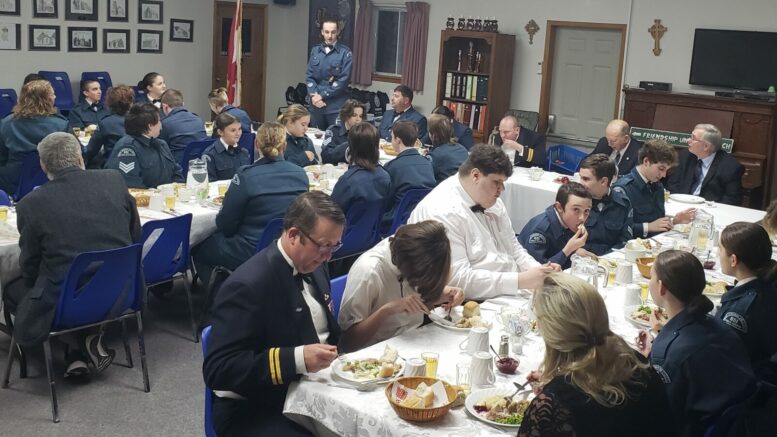 The County’s Air Cadet Squadron was thrilled to again accept, after a three-year COVID hiatus, the offer of one of our great supporters the Prince Edward District Women’s Institute – Demorestville Branch to host a celebratory Christmas Mess Dinner in the Demorestville Church Hall.

The Dinner was a phenomenal success.

Based at Mcaulay Mountain, 851 Prince Edward RC(Air)CS featured 29 Cadets present at the dinner, as well as the Canadian Forces members and Civilian Volunteers who lead the program.

Also invited were representatives of the local official sponsoring organizations: the Kinsmen, Kiwanis and Rotary Clubs of Picton; the Royal Canadian Legions in Picton and Wellington; and 415 Prince Edward Wing of the RCAF Assn. In addition to being a financial sponsor, the Women’s Institute volunteers counted among them past 851 Cadets as well as mothers and grandmothers of current Cadets. Having been oversubscribed with volunteer parents, only a dozen parents of current Cadets could be fit in to provide support serving the dinner and witnessing the presentation of many honours and awards.

The dinner follows the format of a traditional, formal military Mess Dinner, providing the Cadets with an opportunity to practice their proper manners, and be on their best behaviour. For the new Cadets, they get to wear their uniform, badges, and medals together with a white shirt and bow tie for the first time. All Cadets are eligible to play one of the important speaking roles at the dinner, which the cadets themselves organized.

The Squadron was fortunate to weather the COVID storm, retaining a very strong core of senior members to guide the many new Cadets that have joined over the last two years. The Squadron recognized the service of five Senior Cadets with the award of a Bar to their Air Cadet Long Service Medal recognizing four years of service. As members of 851 Prince Edward, the Cadets are provided with the opportunity to gain skills and knowledge of Aviation and Aerospace subjects. They are also given the opportunity to participate in summer training which can culminate in the Glider and Power Pilot programs. During the year, in addition to the aviation subjects, Cadets get to learn and apply the same survival skills as a downed aircrew member. They also participate in sport and fitness activities, as well as Air Rifle Marksmanship and Biathlon.

The Cadet program offers one- or two-week summer Cadet Activity Programs for Cadets who have joined during the year before March Break. They offer participants the opportunity to widen their general and specialist knowledge, and also to meet Cadets from across the Region, Province, and across Canada.

As a final highlight, all present were treated to the opportunity to watch our most recent joiners be sworn in, the first members of 851 Squadron to swear an oath to His Majesty King Charles III.

The speaker at the dinner, Capt Rachael Cooper, was a previous 851 Cadet and also a Cadet Officer at the Squadron.

She spoke about how her Cadet service gave her a great focus on service, how the skills she gained as a Cadet supported her as she attained her degree and professional qualification as a Registered Nurse, and how she has now realized her long-held goal of becoming a Critical Care Flight Nurse in the RCAF.

In addition to their training, members of the Squadron, as part of the program, participate in many local charitable initiatives.

Every year our Cadets participate in events like the Owen Jones Memorial Community Clean-Up. Since September, they have attended several Fall Fairs, supported the local Poppy Campaigns, supported the Remembrance Day ceremonies in Picton and Wellington, and participated in the Christmas events including manning the Salvation Army kettles. Cadets have many opportunities to participate in community activities and earn the all-important volunteer hours necessary for high school graduation.

More information on the Cadet program, and how to register online, can be located at https://cadets.gc.ca,or you are welcome to email the Squadron at 851air@cadets.gc.ca.Otherwise, feel free to drop in – 851 Prince Edward meet Monday evenings from 18h30 to 21h00, September to June.