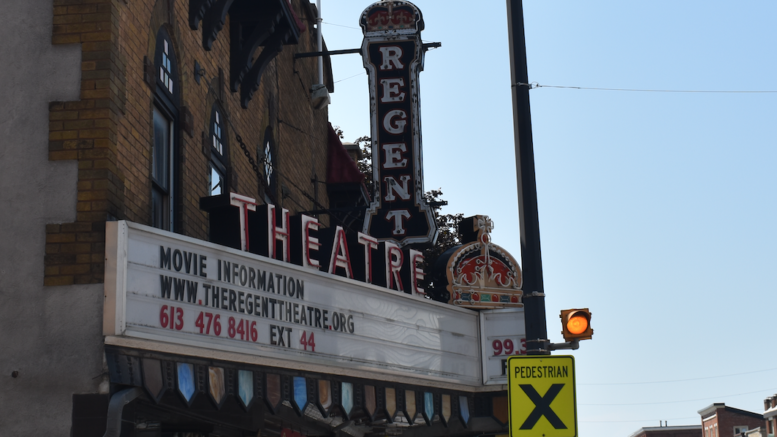 Picton’s Regent Theatre is getting a big boost from Telefilm Canada.

These funds will enable the Regent to continue its popular Special Screening series and support cinema-related operating expenses for the period of one year. Last year, with the support of the Ontario Arts Council, The Regent Theatre was able to present 13 special screenings of Canadian films which, on average, grossed higher attendance than regular-run features.

Building on that success, the Regent plans to continue offering Special Screenings whereby filmmakers attend in-person discussions and audience Q&As. This year, with the support of Telefilm and in partnership with local businesses, Special Screenings will continue as a staple of cinema programming at The Regent.

“Our job is to make coming to the theatre special for our audience. Providing opportunities for our audience to engage with filmmakers is just one of the ways in which we are adding value to our patron experience,” said  Alexandra Seay, Executive Director, The Regent Theatre.

Writer-turned-screenwriter Catherine Hernandez was in attendance to sign copies of her book before the show and engage in a lively post-show discussion and Q&A. Over 100 people attended the event. Put into perspective, the Regent’s run of the Cate Blanchett starring film Tar grossed 100 patrons total over the course of a four-day run. Similar partnerships are planned for the new year with Toronto Irish Film Festival and Alternatives for Women among others.

Continuing the tradition established last year, The Regent will work with the National Film Board of Canada (NFB) and other distributors to screen Canadian short-films as part of our pre-show experience.

“I am particularly proud that, with Telefilm’s support, we are able to continue presenting the work of Canadian filmmakers. There will never be a robust audience for English Canadian cinema unless we, as exhibitors, commit to building one. Showcasing Canadian filmmakers in both our

The Regent also announced the first Special Screenings of 2023: The Death of My Two Fathers, sponsored by the Royal Hotel and Chateau Laurier Season 2 sponsored by Geneva Film Company.

“We are proud to be hosting the Canadian theatrical premiere of Sol Guy’s film The Death of My Two Fathers -an official selection of  HotDocs- and excited to be collaborating with our generous community partners at The Royal Hotel,” said Seay. “In the words of director Sol Guy, this film ‘speaks to the complexities of multiracial identity and the persistence of racial trauma…[and] to the challenges of fatherhood.”

This event is timed to coincide with Black History Month and amplify the Black voices in the Prince Edward County community. James Stewart, acclaimed Canadian producer/director, attended the screening of his award- winning short-film Foxed! in conjunction with last year’s Special Screening of Charlotte and will return on Feb. 27 for a Special Screening of his historical web drama, Chateau Laurier – Season 2.

“Having your film show on the big screen is vital to getting the word out and building an audience in communities across Canada. There is nothing more immersive than having an audience enjoy a collective experience with your story – in a cinema. For storytellers in a TikTok world, this is a dream come true,” said Stewart.

Seay mentioned the  success of the special screening series to date is proof positive that the big screen is still mportant to audiences and filmmakers alike and that audiences appreciate the increased level of engagement provided by having filmmakers in attendance.

This Telefilm funding will also help offset increasing costs associated with cinema operation and enable The Regent to continue to provide year-round employment.

Sponsored by The Royal Hotel

The Death of My Two Fathers.