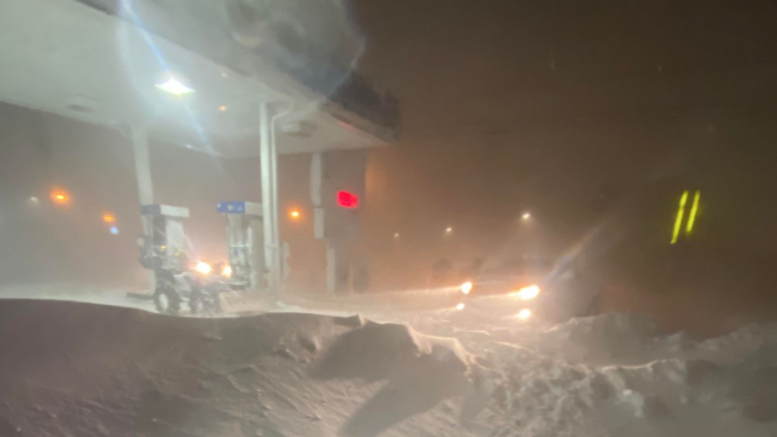 The view from the parking lot of a Picton gas station on Christmas Eve. (Matt Crawford photo)

A heavy rainfall transitioning into a major snow and wind storm that played havoc with the power grid on Christmas Eve nearly ruined a Picton couple’s first holiday in Prince Edward County.

But enter some caring neighbours, a Good Samaritan with a generator to lend and social media and Christmas and the couple’s home was saved from the Storm of 2022.

Mike and Jess Da Silva moved to their home on Paul St. in November and as Mike relates, the couple had never lived in a home with a sump pump.

“After the heavy rainfall that had occurred, I did a check to see how the pump was working. It was quite active with lots of water going through but it was working and we had a secondary backup pump on a battery backup should the primary one fail so we thought we were OK,” Da Silva told the Gazette.

But the storm intensified and soon pockets of Picton were without power including their area of Paul St.

The battery powered back up pump kicked on but soon it gave way and the Da Silva’s knew they had a major problem.

They emptied storage bins and started to bail however they couldn’t keep up with the flow. Jess, at eight months pregnant, did her best but soon the couple realized they needed help.

“While I kept going, she reached out to neighbours to see if anyone was home and had a generator. Our amazing next door neighbours put on their boots, grabbed their buckets and came over to help,” Mike recalled. “We had an assembly line of filling these big bins, moving them and then emptying them into buckets that were much easier to carry upstairs and outside.”

Thankfully, a nearby neighbour had a generator to lend.

“We got it running and plugged into the pump. Once the pump was going again we managed to get everything under control, all the bins emptied and the floor mopped up as best we could. After the hard work, the neighbours went home and we kept an eye on things and plugged in our fireplace for some heat,” he said.

Peace. For the moment, anyway.

After a short few hours, the fireplace went off but the couple was able to hear the generator running. Mike checked on it and sure enough, no power.

“The blizzard conditions managed to fill the generator up with snow and caused and electric failure. The neighbours came by to look as well and despite trying a few different things, it would not work. We couldn’t believe it. We started flooding again. All of us still tired from the first round, we quickly all got back to the assembly line of bailing water, filling bins, and carrying buckets outside. This time, it was all by candles and flashlights,” he recalled.

This time, enter Matt Crawford of Superior Excavating who posted on social media he was available to help any Pictonian in need during the storm.

Jess was able to get Crawford on the phone and explained the flooding situation and the need for a generator. Crawford quickly offered to load his generator up and come drop it off.

“We were thrilled with this news and crossed out fingers that he would be able to make it over,” Da Silva said.

Within about 30 minutes- despite the roads being in brutal conditions and being total strangers-, “this guy Matt from a facebook post” shows up in his truck with a generator and a jerry can full of fuel.

“We got it working, plugged in and I put together a make-shift housing for it to prevent the wind and snow from getting at this one,” Da Silva said. “We didn’t sleep that night. It was a matter of constantly checking on the pump, the generator and the fuel level.”

Once the power returned Christmas day, the couple spent the following few days ripping out all the saturated carpet and underpad and getting everything dried with several fans and dehumidifiers.

“Thankfully, between the help from the neighbours and Matt bringing over that generator, the damage was contained to just the flooring and baseboards,” the home owner said. “Without the generator to power the pump, there really was no stopping the water coming in so I’m sure we would have gone from inches of water to several feet. Matt was kind enough to leave it with us for the week just in case.”

Crawford, who spent most of the holiday weekend plowing snow and running rescue missions for people stranded by the storm, said he never thought twice about striking out in a blizzard with a generator to lend to a couple he’d never met.

““I went back to pick up the generator and they said ‘You saved our house’,” Crawford said. “At this time of year and in conditions like that, we all have to pull together.”