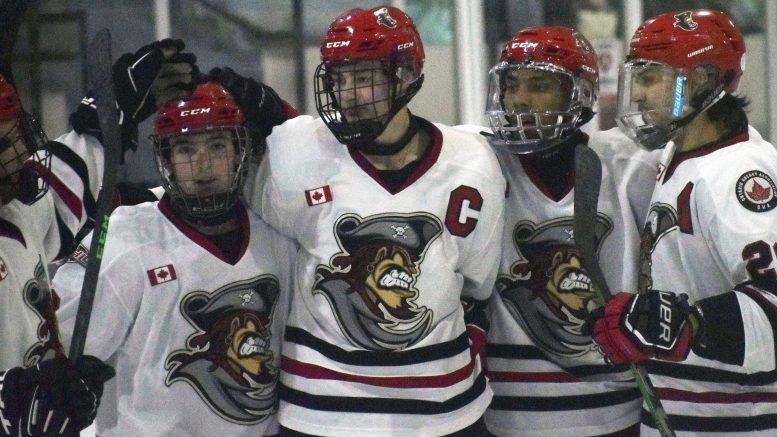 Discipline, attention to detail in their end of the ice and a balanced scoring attack helped the Picton Pirates pick up a pair of valuable wins this weekend.

The locals were able to skate away from the Amherstview Jets 7-2 on Thursday night and then, on a rare Saturday night at their home port at Huff Estates Arena, Picton topped the visiting Frankford Huskies 5-1.

The weekend victories allowed the third place Bucs (14-10-2, 30 points) to leapfrog the Huskies without burning one of the three games Picton has in hand on Frankford. Picton trials second place Amherstview by nine points but has five games in hand on the Jets.

Earlier in the week, the Pirates made a pair of acquisitions that factored into Saturday’s win.

Right winger Nate Woods, a one time Pirate during the abbreviated 2020-21 season where Picton played a series of “games” against the Port Hope Panthers and Napanee Raiders during the winter where regular hockey programming was halted due to COVID-19 has rejoined the club after starting this season in Wellington. On the back end, the Pirates added Napanee Minor Hockey grad Jakob Dacosta who had four points in nine games for the Raiders this season before being let go.

“We very happy to make these key additions,” Pirates General Manager Jason Parks said. “Jakob can step in and play a valuable role for us. We’ve always like his game going back to tryouts last season. And as far as Nate goes, we feel like we hit a home run being able to get him back into a Pirates lineup. He’s a huge addition for this hockey team and full credit goes to the scouting and coaching staff on both these pick ups.”

After potting a hat trick two nights prior, veteran Jack Dow opened the scoring at the 7:49 mark of the first when he directed Nick Kirby’s cross crease pass past Frankford starter Hayden Candler for a 1-0 lead.

The Pirates would double that lead inside the final minute of the frame when Cole Lavender’s dump in behind the Huskies net took a fortuitous Picton bounce and Landon McLellan was able to swoop in and put the puck past Candler on the glove side for a 2-0 score.

Picton would have the only tally in the second as Lavender took a Hosea Aculiak pass and went bar down with just under three minutes left in the middle stanza.

Former Campbellford Rebel Dryden Minifie would sweep home a loose puck off a scramble play in the Picton end at 5:32 of the third to make it 3-1.

But before Frankford could reassert pressure in the Picton zone, a minor penalty had them penned in their own end. Less than 30 seconds after the Huskies got on the board, Dow spotted McLellan at the top of the circle and Picton’s captain blasted his 16th of the season at 5:57.

At the midway point and Picton cruising, the Pirates put the game to bed as Gerrit Kempers picked up his fifth point in three games, lighting the lamp at 9:32.

Dacosta and Woods added assists on the scoring play.

Brady Spry stopped 21 Frankford shots picking up his ninth win of the season.

On Thursday, Spry was much busier in the Pirates net but Picton was able to salt the game away in the third period as the frustrated visiting Amherstview Jets beat a path to the penalty box.

After a scoreless first period, Amherstview would open the scoring in the second when Matthew Donovan dumped a Pirate penalty killer in front of Spry and tipped a Zack McMahon shot into the Picton net at 6:39.

But less than a minute later, Kempers would spot Kingston U18 AAA call up Geoff Boates heading to the Jets net unchecked and laid a pass that the Gael would snap past Amherstview starter Alex Chu at 7:23. The Jets responded exactly 60 seconds later when Donovan’s volley managed to ride up Spry’s stick and over the Picton goalie’s shoulder to temporarily restore the visitor’s lead at 2-1.

From there, the game was all Picton.

Dow would get credit for his 18th goal of the year when he flipped the puck into the Jets crease and an Amherstview  defender beat Chu clean to the glove side at 11:24 to make it 2-2.

Later in the frame, Dow would snap home a power play tally at 14:22 to give the locals their first lead of the contest.

In the third, the Pirates would use the power play to pull away from the Jets.

At the 14:13 mark and with Picton with a man advantage, Zack Brooks tapped up a McLellan feed on the Jets doorstep to push the score to 5-2.

Boates would play trigger man on another nice Kempers pass at the 16:26 mark for his second of the game.

Picton then tacked on another power play goal when Kirby lifted a back hand effort into the top of the net from a Cole Stevenson feed in close.

Spry made 38 saves for Picton and should earn a rest over the coming weeks as Ethan Beattie, stricken with mononucleosis, has returned to the club with a clean bill of health and has backed up the last three games.

The Pirates host Campbellford on Thursday evening and then sit idle for a week before hooking up with Port Hope the following Thursday.