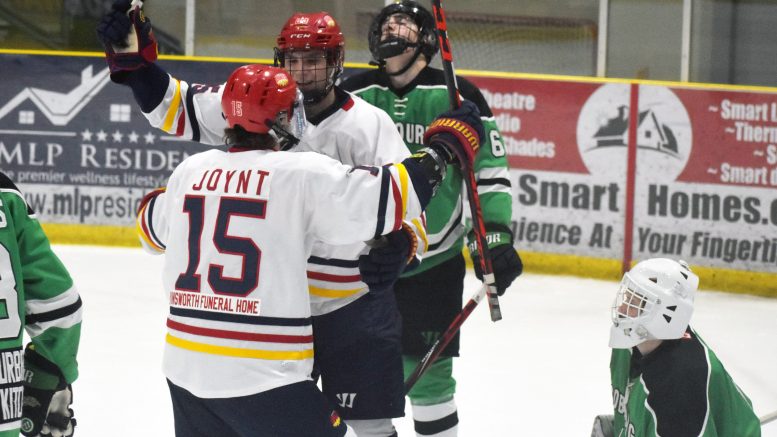 THAT SINKING FEELING- Barrett Joynt celebrates Jared Langdon's seventh goal of the season while Cobourg's Adam Barone and Ryan Prios can only look skyward as the host Wellington Dukes notch their sixth goal of the night en route to a 9-2 win Friday. (Jason Parks/Gazette Staff)

The Wellington Dukes looked as sharp as a tack and played like it this weekend as they picked up a valuable four points and moved higher in the Ontario Junior Hockey League’s Southeastern Conference.

Closing out the back end of a home-and-home series with the Cobourg Cougars, the Dukes laid waste to the Cats on Friday at home 9-2.

On Sunday, Wellington, on the strength of an incredible individual effort from Connor Hunt, defused the host North York Rangers 4-1.

Wellington’s road game against Caledon on Thursday was postponed due to poor travelling conditions.

With the pair of wins, the Dukes upped the ante in the conference and moved closer to the 30- win mark. Wellington has a 28-9-4 record and is now neck-and-neck with the Haliburton County Huskies, trailing the Dogs by a single point for second place in the Southeastern Loop.

Suffice to say, the log jam in the Conference has started to clear as the clubs enter the stretch drive of the regular season.

On Friday, the Dukes beat a path to the Cougars net early and often, scoring three goals in each of all three periods.

Midway through the first, the Dukes would lead 3-0 after a span of two and half minutes. Ryan Cutler would come through on the power play at 9:49 off a David Campbell feed.

Campbell would tally another helper at the 11:28 mark of Nolan Mozer’s point shot and them. Julien Jacob’s second assist of the frame  sprung Jacob Vreugdenhil at 12:18 to push the locals ahead by a field goal.

Jacob Gilbert responded for the Cougars at 17:11 of the first to make it 3-1.

In the second, Lucas Lapalm would snap a puck past Cougars starter Matthew Sbrocca at 11:57.

Just over a minute later, Ryan Cutler spotted newcomer Luke Strickland at the crease area and a nice feed to Wellington’s prized trade deadline acquisition resulted in the Dukes moving ahead to a 5-1 lead.

Near the end of the frame, rookie Jared Langdon redirected a Ryan Smith pass through the wickets of Sbrocca who was mercifully yanked in favour of Ryan Piros.

In the third, the Cougars would beat Jacob Osborne at 6:35 as Jakob Morier fired his seventh of the campaign. Connor Hunt after Sunday’s game where he notched a hat trick in a win 4-1 over North York. (Dukes Twitter)

But Wellington looked to be skating downhill all evening the club’s offensive onslaught continued into the third.

Cutler banged out his second goal of the night at 12:25 and then set up Jacob just 14 seconds later.

Finally, Cutler capped off a five point night when Graeme MacAuley put a power play effort behind Piros with just 18 seconds left in the game.

Osborne would post his 12th win of the season while Julien Jacob’s three points kept him within shouting distance of the OJHL’s top scoring defence man title.

Jacob trails Toronto’s Cooper Bertrand by a couple of points through 41 games played.

On Sunday night at the Paramount Ice Complex in North York, it was the Connor Hunt show live and in living colour.

Hunt would intercept a Rangers pass and snapped a puck past Nicolas Morvan for a Wellington lead just 70 seconds into the game.

Wellington’s Corbin Roach would fire home the eventual game winner just over three and half minutes later thanks to a nice pass from Barrett Joynt.

The Rangers would push through in the second, finally solving Wellington starter Ethan Morrow at the 4:39 mark as Jacob Strizzi scored but the Dukes net minder was sensational in the middle frame and the game still in question as he denied Riley Paterson twice in close.

Morrow stood his ground on North York’s top scorer off a breakaway and then, with the Rangers catching Wellington flat footed, Patterson played would be trigger man on a nice two-on-one rush that kept the 2006-birth-year sniper off the score sheet.

In the third, Hunt would capitalize on a Edward Moskowitz pass near the net at the 10:23 mark to provide the visitors with some insurance and then capped off his first multi-goal OJHL effort with a hat trick marker into a yawning Rangers cage with seven ticks on the clock.

Wellington fired 44 shots onto the North York net while Morrow made 24 stops for his 15th win of the campaign.

The Dukes look to make it five in a row on Friday when they host Mississauga. Wellington then travels to Minden for a four point contest against the Huskies. Haliburton is back in Wellington on Feb. 3 to close out the extended home-and-home series.