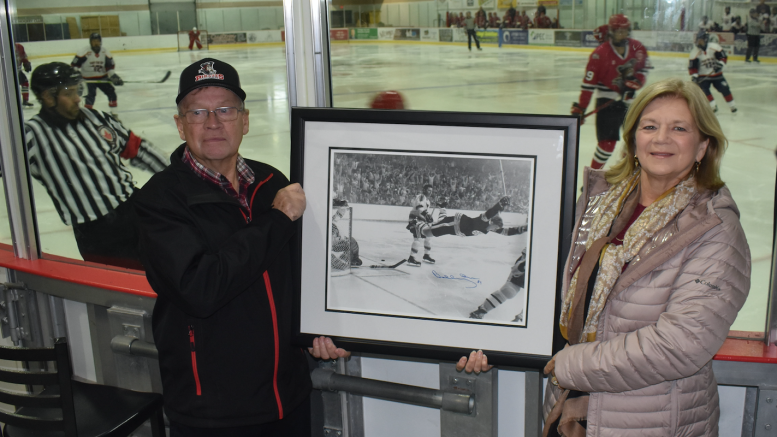 A signed version of the NHL’s most iconic photographs is available in a raffle organized by the Picton Pirates.

Those who were alive to witness it or who have seen the replay on Hockey Night in Canada about a million times since Bobby Orr’s Stanley Cup wining goal in 1970 will remember the greatest defence man of all time making a give-and-go play at the St. Louis Blues goal line just 40 seconds into overtime of Game 4 of that year’s finals.

After beating Mr. Goalie Glenn Hall for the right to hoist hockey’s holiest grail, there was nothing left for defeated Blues defender Noel Picard to do but trip Orr and turn him horizontal.

The trip created a moment in time captured Boston Record-American photographer Ray Lussier where Orr is celebrating the instant he realizes he’s won his first Stanley Cup while seemingly flying through the air.

The image is considered one of best sports photos of all time and Paul Henderson leaping into the arms of Yvan Cournoyer a couple of years later at the Luzhniki Ice Palace is the only  other hockey picture that could hold a candle to a frozen moment engrained in the memory of most fans.

A large print of Lussier’s work, signed by Orr himself and given to the local Provincial Junior Hockey League club, is being raffled off.

“It’s a very interesting story,” explained club treasurer Cliff Rice. “Our bookkeeper Mary Camp was in Florida and made a connection with a minor hockey teammate of Bobby’s from Parry Sound named Jim Peters. Jim heard all about the Picton Pirates and wanted to help out the team so he was able to source this signed photo directly from Bobby and they sent it to us to be raffled off.”

Tickets for the signed print are available to purchase at all Pirates home games or from club executive members with the draw taking place at Picton’s final home game of the season on March 2.

As a bonus, those purchasing two raffle tickets on a Pirates home game night will get a free admission to that evening’s hockey game.