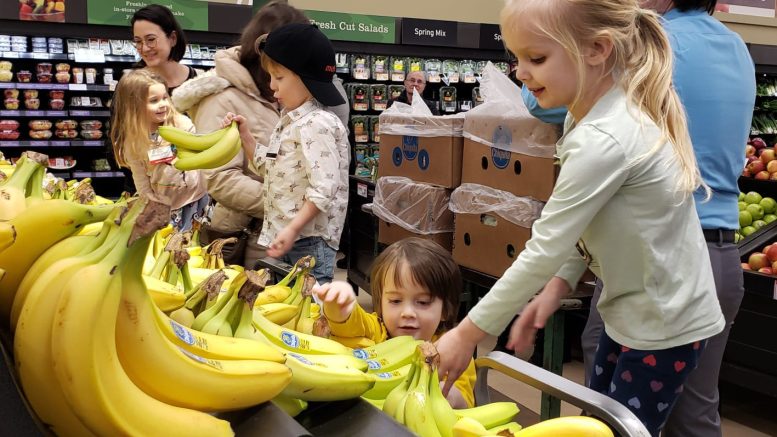 There isn’t any birthday party like a Metro Picton Birthday party! (Centre) Lav Goldfarb turned four this weekend with help from his friends Jacob and Emilia at the Picton grocery store. (Submitted Photo)

For some children, the birthday party location hierarchy might include a trip to a theatre, a play land at fast food joint or even a trek into a metropolis for a celebration at Chuck E Cheese.

Well, a ‘Metro’ was involved in Lev Goldfarb’s 4th birthday this weekend, but it was a unique concept well outside of the banana box of anyone’s mind.

Lev invited his closest friends and family for a party at Picton’s Metro grocery store on Saturday where manager Murray Lupenette and assistant manager Paul Jones and the friendly staff pulled out all the stops to make sure the group of little revellers learned about the store, left with their bellies full and had a great time. “A few months ago our three year old son began talking about having his upcoming birthday party at Metro. Yes, Metro the grocery store,” Lev’s mom Hadas Brajtman said in a social media post. “He called it his “Metro Party” and was super excited about it. Brajtman explained her family often shops at Metro as it’s walking distance from their home. She said the staff are always friendly and typically, trips turn into social outings as they might run into friends, colleagues, and neighbors while shopping. “So when our son told us he really wanted to have his party there, it kind of made sense,” she said. “But while we thought it was the cutest thing ever, we never considered it a real possibility.”

However, when Jones caught wind of Lev’s request to celebrate his birthday at the store, the assistant manager decided he would take it upon himself to make the little boy’s dream come true. With the support of Lupenette and the enthusiasm and creativity of the staff, Metro worked hard and delivered an experiential, fun, action packed party. Upon entering the store on a busy mid morning, Lev, his friends and their parents were equally stunned and elated to see Staff had printed Happy Birthday posters and placed them all around the store, setting the celebratory tone and making everyone feel welcomes. Children received Metro name tags and hats while Jones provided a tour with numerous experience points that explained the store’s operations, what the day-to-day activities and goals were and a look behind the scenes at the deli, the produce section and the bakery.

At the service desk, the children sang happy birthday in the PA system while over at the deil, the kids were given a chance to create their own pizzas. Jones had the group earning their keep by asking them to stock bananas in the produce department.

At the bakery, the DIY theme continued at cupcake design was next on the grocery list. Speaking of lists, a scavenger hunt of grocery items was next.

“Paul gave the kids a list and off they went to find the different items around the store. They filled up the cart and helped ring the items through and bag them and the kids took this one really seriously,” Brajtman said with a laugh.

Finally, party goers were invited upstairs where the staff break room had been transformed into “the coolest party room ever.”

Balloons, streamers, snack tables, drinks, pizzas, ice cream and cake were waiting. Staff even had Lev’s favourite show Peppa Pig playing on the TV and a team member sang Happy Birthday to Lev over the PA system. During the entire two hours, various staff members, Lupenette and Jones were there with the group making sure everyone was happy and genuinely partaking in the fun experience with us.

“We are so grateful to Paul, Murray, and the rest of the rockstar Metro family for a truly remarkable experience,” Lev’s mom added. “They were so incredibly generous with your time, resources, creativity and for going above and beyond to create an experience that we will all remember for the rest of our lives.”

In terms of a life experience, Brajtman noted sometimes people are quick to brush off an idea that might seem radical or infeasible.

“ (Metro) didn’t brush off an idea that came their way, even though it had never been done before and even more so because it came from a three year old. Thank you for listening, for demonstrating the true heart and soul of our community and how impactful our business community is,” she added. “We also learned in this process that it’s important to ask, rather than assume the answer is no, and dare to engage in conversation and ideation, because you truly never know, and you may be very pleasantly surprised. I know I am inspired to take a page out of Paul’s book, and hope I can play a role in doing something similar for someone else, for many others in my own line of work.”